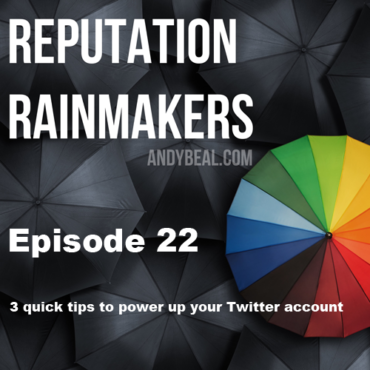 Just back from Chicago, but I have 3 quick tips to help you power up your Twitter game!


Each week, Erin Jones and I take a look at the most interesting reputation management stories, answer your questions, and share valuable ORM tactics. In this week’s episode:

Andy Beal:                  Welcome, welcome. I hope your week is going well. It’s kind of a rushed week for me, so this is an abbreviated pod cast. I was in Chicago earlier this week, but I had a really fun experience on Twitter and so that kind of gave me some ideas for just a quick pod cast, a quick lesson here, three key applications for Twitter. Hopefully you’ll find this useful. What triggered this? I was at a Chicago Cubs game, my first time there, and the weather was pretty abysmal. It was raining all day and even an hour before the game was supposed to start, still no assurance that we were actually gonna watch some baseball because it was raining.

Anyway, reached out to the @cubs Twitter handle and didn’t really bother asking them if they were gonna play because I already seen they weren’t sure. But I did ask them would I be able to sell my tickets on stubhub easily because I was in town, I wasn’t able to come back for any make up game. Well, I had barely closed Twitter and returned to my email when I got a notification that they had replied and with a very quick yes, was the answer and it really blew me away how quickly they replied.

I went back and I told them just that. To which they posted an animated gif with a fist pump and really got me looking at the Cubs’ Twitter page and this is not out of the ordinary for them, they really understand their audience and they like to engage them. Here is a classic example, you’re worrying about whether or not a game’s gonna go ahead and so they were making sure that they’re around looking for any questions and answering them as they come in as quickly as they can. If you dig deeper, you see that they really do engage their audience fantastically well, they’re not just pushing gout announcements and starting lineup and all that kind of thing. They are actually retweeting, they’re engaging with them, responding, a lot of people are specifically asking for animated gifs of their favorite choosing and getting those and getting birthday greetings and all that kind of stuff.

It’s really amazing. They’ve got millions and millions of followers, yet they’re able to actually understands the audience is looking for engagement and they’re delivering on that. So, if you’ve got a Twitter account, first lesson here is to whoever is running that twitter account, give them the permission to actually engage, to don’t just pump out news and updates, but to really understand your audience and engage with them.

That got me thinking about some other great examples on twitter and I wanted to turn your attention to AT&T. AT&T is my go-to account on Twitter. If I have a problem, I don’t even bother going through customer service, because who knows which country I’m going to end up being connected to. I go straight to Twitter and I ask AT&T Twitter team for help. They have a dedicated team and the lesson here is that they prioritize tweets. If they see that somebody’s taken to Twitter to ask their question, there’s probably a good chance that this person is socially savvy, may actually start complaining if things don’t go well, and also may share positive praise if thing go great.

They have this dedicated team, they can’t always assist you on Twitter, but they’ll generally call you within minutes or an hour and they seem to have the authority to actually go ahead and get things done. I get better service call times and I get things fixed a lot faster if I went through any other channel. Lesson number two is prioritize those that are reaching out to you via Twitter or whatever social channel has your largest audience.

Last lesson is to empower those that use your Twitter account because there’s so many Twitter accounts where I reach out to them and I either hear nothing or they direct me to a toll free number to call or a special email address, which is kind of really just passing the buck. What’s the point in having a Twitter team if I’m gonna have to call the number anyway? JC Penny, the only time I’ve ever interacted with them, I had a product missing in an order I had shipped to my home and I thought I was gonna have to go to the store, call a toll free number, but no. Within direct messages they got all of my order details and they refunded the missing item and took care of it within minutes. I didn’t have to jump through hoops.

If we can offer customer service through the telephone or email, why can’t we offer it through a secure direct message on Twitter? Those are the three quick lessons. Kudos to the Cubs, AT&T, and JC Penny. Really got me thinking about how to offer great customer service through Twitter. Just a quick pod cast this week to give you some ideas as to how you can do the same. Thanks for tuning in. We’ll be back to a normal podcast next week. Thanks a lot and bye bye.