#32 – Equifax’s real reputation mistake, Nazi costumes are never a good idea, clowns have a reputation problem, but Gainesville PD does not!

#32 – Equifax’s real reputation mistake, Nazi costumes are never a good idea, clowns have a reputation problem, but Gainesville PD does not! 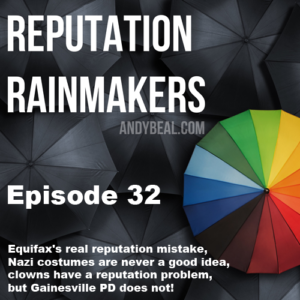 Each week, Erin Jones and I take a look at the most interesting reputation management stories, answer your questions, and share valuable ORM tactics. In this week’s episode:

Andy Beal:                  Welcome back. We’re going to do something a little bit different this week. Five stories that caught my attention and five reputation lessons that go along with them.

So, number one is Equifax. You’re probably aware that they had one of the largest data hacks in history. 143,000,000 consumers affected by this, had their data stolen. What makes it particularly bad is that credit card information, drivers license numbers, social security numbers, all of that stuff was stolen. Now, the hack itself was bad news, but you could argue that the biggest reputation hit that Equifax took was how they handled it. They completely bungled everything from the website that they set up, to insinuating that if you took their free services you wouldn’t be able to sue them later on, all kinds of things.

So the problem that they had, and our reputation lesson as a result is, they assumed that because they’re not really a consumer facing site, they generally work with financial institutions, investors, that kind of stuff, they assumed they didn’t have a consumer facing reputation, and of course, they do. Not directly, but certainly indirectly. So even if you’re a B2B company, you need to have a consumer response, you need to be aware that at some point you are going to have a reputation disaster that’s going to get into the spotlight and is going to require answers and response to consumers. So that’s our lesson for Equifax.

Number two, Pizza Hut. So during the storm with Hurricane Irma, one local Pizza Hut manager threatened disciplinary action to employees if they tried to evacuate outside a specific set guideline of hours that they could evacuate. So basically, if you left too soon or didn’t come back in time, you could face disciplinary action. Of course, this got leaked onto the internet, caused a big headache for Pizza Hut in general.

So lessons here, assume that all internal memos will be leaked. Putting stuff in writing, sending something to an employee, posting it to a internal forum, message board, whatever it is, always assume that at some point someone’s going to be upset enough that they’re going to leak this, and how will that look for your brand? Then for Pizza Hut, this was a franchise owner, but this is a franchise owner of your Pizza Hut brand, so in this instance they should have taken precautions to have a more corporate policy on this kind of stuff as to when employees could leave and come back, and maybe loosen the chains. And in fact, Pizza Hut did come out and say that this is an isolated incident and that the franchise owner’s been spoken to. But you cannot brush off, you cannot set aside and say, “We’re not going to take responsibility, this is down to the local managers.” When that local manager could have a massive negative effect on your corporate reputation.

Number three, we’re going to take a look at Paul Hollywood. He’s a TV celebrity chef. I don’t know him personally, but he’s popular enough that he got into some trouble when a 14 year old photo of him wearing a German Nazi uniform surfaced. Now, mitigating circumstances here, he was on his way to a themed party for the British comedy ‘Allo ‘Allo, which is kind of like Hogan’s Heroes kind of type thing where it’s a comedy about the war, but it’s constantly mocking the Germans and making them look bad. So in context, not so bad. But he goes into a pub, gets a photo taken, and 14 years later he’s having to apologize.

Now, lessons here, just because it was 14 years ago doesn’t insulate you from a reputation scandal. You still need to be ready to give an account for it. But the main lesson is, you can’t predict when this stuff is going to come out, so you can’t always assume that there’s going to be some kind of context around it. People were not necessarily given the context that he was going to a party. So anything that you do, any action you take, any costume you put on, ask yourself, “Without the context of why I’m doing this, could people be offended by this?”

Now, yeah, some people are going to be offended by everything. But could the majority of people be offended by this? In his case, him wearing a German Nazi uniform without any explanation, especially in these last few days, definitely going to offend a lot of people. So you have to assume, “Okay, without context would I offend people?” If so, don’t do it. So that’s a good rule of thumb for emails, advertising campaigns, promotions you do with your customers. Think about, okay, this might go down well with our customers, but if somebody else saw it, would it be poor taste?

Number four, do you think that clowns have a reputation problem? Well, apparently the World Clown Association is blaming Stephen King’s It reboot for ruining their reputation. Saying that it’s giving clowns a bad name and making people scared of clowns. Okay, reputation lesson here, your reputation is just a mirror of your character. So I would argue that there are a lot of people that find clowns to be creepy, regardless of whether or not they’ve even heard of Stephen King’s movie and book, let alone read it or seen it. So clowns, half the people probably fear clowns anyway because they’re kind of creepy.

However, what could the clowns do here? I can’t believe I’m discussing this. All right, so the clowns should be out in force at every movie theater, they should have rallies going on, they should be doing tricks and balloon animals and putting pies in their face, to reassure people that, “Hey, clowns are fun. We’re not creepy.” There should be just a concerted effort, so at this point when clowns are being discussed and shown, that hey, don’t be afraid of clowns. Yes, there’s a few freaks out there, but clowns are fun. But however, you’ve got to consider this and you’ve got to say to yourself, clowns, “Hey, we are a little bit creepy. We’re grown ass men walking around with makeup on, with funny wigs and funny costumes.”

Number five, Gainesville Police Department. They posted a picture of three handsome police officers that were about to do the night shift and go out and help with the hurricane cleanup. Now, the guys were good looking, having fun. The police department did not objectify the officers, they just posted it. They were saying, “Hey, look, here’s three guys that posted a selfie and they’re going out to do cleanup.” 413,000 likes later, 233,000 shares, 150,000 comments. And now they’re going to produce a calendar.

So the reputation lesson here is, don’t be an anonymous brand, right? Show the people in your company. Let them take pride in their work. Have a little bit of fun. The Gainesville Police department joined in with all the comments and decided that, “Hey, you know what, this is some harmless fun.” Like I said, they didn’t objectify the officers, so don’t ever do that. But if your audience does, finds them to be handsome, good looking guys, asking if they’re married, if they’d like to go on a date, all that kind of stuff, just go along with it. You’d be surprised, a single post, huge social sharing, and a big win for the Gainesville Police Department, and a lot of good publicity for them.

All right, so that’s five reputation case studies for the week, five lessons from that. Hopefully we’ll be back to our normal format next time, so please tune in or visit our Facebook page /AndyBealORM, leave us a question, point out any stories you’d like us to talk about, and we’ll see you again next time. Bye bye.

Share the post "#32 – Equifax’s real reputation mistake, Nazi costumes are never a good idea, clowns have a reputation problem, but Gainesville PD does not!"