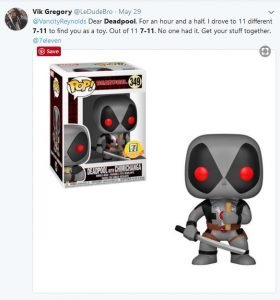 7-11’s marketing team must have been patting themselves on the back six months ago when they finalized the deal to bring two hot commodities: Deadpool and Funko into stores in time for a big movie release.

When word hit the streets that the convenience store was going to stock exclusive Deadpool Funko Pops, collectors went wild. They counted the hours until release day, then rushed into their nearest 7-11 with cash in hand the moment the clock struck twelve. Seconds later, they walked out disappointed with all of that cash still in hand. Then they moved on to the next 7-11 store, and the next and the next. . .  I personally hit three. On social media, collectors spoke of hitting 11 and calling every store within an hour’s drive.

And who finally found the illusive chimichanga-clutching superhero?

Not one person in all of the United States came home with the promised toy. To make matters worse, most of the employees had no idea what the collectors were talking about! Funko? Pop? Toy? 7-11 doesn’t carry toys, but we do have these Deadpool straws and Slurpee cups.

Cute, but not even close.

In case you’re not familiar with the toy, Funko Pops are the hottest thing in collectible vinyl figures. They retail for $9 to $14 dollars when they first bow but many are “vaulted” after a short period of time. On the secondary market, vaulted figures can sell anywhere from $100 to $1,000. To make them even more valuable, Funko releases numerous variations of the figures as store exclusives in places like Target, Barnes and Noble and Hot Topic. And they release an even more limited version of some figures called “chases”. Find one of these “in the wild” and you really are sitting on gold.

For the release of Deadpool 2 (a Marvel superhero movie), Funko created a half dozen variations of the titled character and invited collectors to travel to each retailer in order to collect the full line. It’s marketing genius because it pushes people to shop in a store they wouldn’t normally visit – like 7-11.

I’m a Diet Coke girl and for a week, I changed my routine and bought my soda at 7-11 even though it meant going out of my way, just for a chance of scoring one of those rare Funko figures, but all I got out of it was a sour taste for both the movie and the franchise.

On launch day, dozens of people Tweeted 7-11 asking how to find the Pop. At first, there was no reply at all. Then, the official channel began sending out vague replies saying that only some stores would get them “later this week”. When asked which stores. They replied that they had no way of knowing. Which makes no sense. Since the stores had to pre-order the toys, 7-11 Corporate has an exact record of which stores were getting them, so why not publish the list?

For some reason, 7-11 also chose not to even mention the toys on their social channels, or even on their website. They did promote the straws and the Deadpool themed Trolli candy but not the toys. Why? The one manager I found who knew what I was talking about told me the toys were delayed because of a change in the movie release date. If that’s true, all 7-11 had to do to calm the angry natives was to go online and say so. Instead, they stood by and watched as 100’s, then 1,000’s of potential customers left their stores angry and confused.

A few days after the official launch date, one collector found a Deadpool Pop in Washington State. A day later, a couple more showed up in California. This beacon of hope had angry collectors putting their hatred for 7-11 aside long enough to make another try but most came away empty-handed and angrier than ever before.

Think it can’t get worse? It got worse. This week, collectors are online with a new horror story. They’re finding the precious pops, but the store owners are refusing to sell them for the $14 retail price. One collector had to fork over $30 bucks to get his. Is that legal?

How Much Did 7/11 Charge Me For Deadpool With Chimichanga Funko Pop Excl… https://t.co/d5uRShY6oV via @YouTube @OriginalFunko @7eleven. Really? This store charged $29.99 just because it was the last @deadpoolmovie exclusive pop? 😱😡😡

Many 7-11’s are independently owned but does that mean they can make up their own prices? Now, it’s not just the franchise that is taking the hit, collectors are calling on Funko to put a stop to the madness. And now it’s their reputation on the line.

I know, you’re saying to yourself, “all this craziness over a toy?” Yes and no. What it’s really about are the promises a store makes to its customers. When 7-11 and Funko entered into an agreement to sell a special toy on a given day, they had an obligation to make that happen. If circumstances prevented it from happening, then they had an obligation to notify their customers through social media channels and through the employees of the store.

A huge part of the problem with the entire campaign was the lack of communication between corporate and the man behind the counter. Even if a store is independently run, 7-11 needed to make sure every owner understood the marketing plan and then that plan needed to be explained to every employee. We’re talking about a concept that can be explained with a picture of the toy and a single page memo. Hang it in the breakroom and have your employees initial it to say they read it. It’s easy.

Because they didn’t communicate properly, internally or externally, 7-11’s great marketing coup is worse than a bust. It’s actually hurting the company. And it’s hurting the associated properties Deadpool and Funko by association.

Yesterday, one of the most influential Funko Pop collectors on YouTube (yes, it’s a thing) said he never wanted to hear the words Deadpool or 7-11 ever again. That’s not the words you want to hear when you’ve poured millions of dollars into a marketing campaign.

Ten days have passed. If you want an exclusive 7-11 Deadpool Funko you can buy one on eBay but it will cost you around $100. I wouldn’t be surprised if some of those sellers are 7-11 managers or employees who decided a bigger payday was in order. I don’t blame them for making a profit. I blame the 7-11 marketing department and social media managers for not protecting their most valuable assets – their customers.