Survey says 83 percent of customer questions on social are ignored

Survey says 83 percent of customer questions on social are ignored 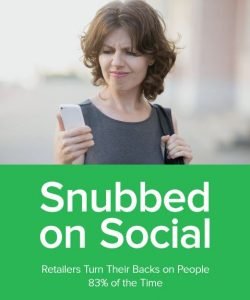 It’s the most frustrating time of the year; for holiday shoppers, that is. The pressure is on to find the right gifts at the best price and get them all in time for whichever December holiday they celebrate with family and friends.

This quest for perfection in an imperfect world often leads to short tempers, mixed messages and consumers cutting ties with brands they previously admired.

In the grand scheme, we all know that a website going down for two hours or a package arriving damaged isn’t worth stressing over but there’s something about the holidays that makes our sensible brain go on vacation–leaving the 2-year old brain in charge. We want it right and we want it now. When we don’t get it we reach out to the perceived powers that be to help.

In the past, we used the telephone and then email for answers to our questions. Now, a large number of consumers turn to Twitter and Facebook for help. According to Sprout Social, the average retailer will receive more than 1,500 messages from consumers during the holiday season. Here’s the problem, though most retailers hire more brick and mortar help in December, they don’t hire more social media monitors. This leads to another, rather staggering, statistic from Sprout Social:

83% of customer questions on social will be ignored.

Sprout wants to be fair here, so they admit that 60% of customer messages don’t need a response. I myself am guilty of hurling “what’s up” messages at various websites when they don’t work properly only to find that they’re aware of the problem and it’s being fixed. (Or that the mistake was on my end).

Companies can’t and shouldn’t respond individually to the barrage of Tweets that happen when there’s a wide-spread glitch. All that does is add to the chaos. Write one explanatory Tweet and run it every half hour until it’s fixed. No need for @ replies.

Taking those messages off the table still leaves 40% that deserve an answer. But the average retailer is only responding to 17%. When you factor in other industries, social media responses come in around 11%. Yikes. 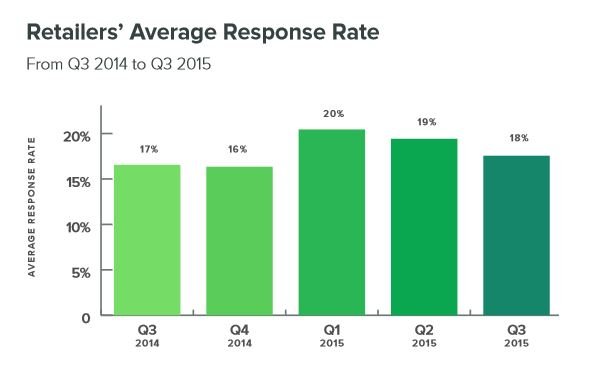 What makes it even worse is that those same retailers have ramped up promotional messages by 45% over Q1 2015. As a consumer, it’s aggravating to see happy “use our coupon code” posts when the website’s been down for hours. I know a lot of these social messages have been pre-scheduled but it’s important to stay on top of these things so you don’t unintentionally make the situation worse.

Even if your site isn’t down, your coupon works and you haven’t “accidentally” run an ad with offensive text; people are still going to reach out with questions. Some will be unreasonable. Some will be plain old dumb but it’s your job to make sure every customer is taken care of in a way that shows you heard them and you care. That’s all most people want. So, you can’t get that package to New York in time for Christmas, maybe a $10 email gift card will ease the pain.

Of course, not every customer needs to be compensated because you can’t make their wish come true. However, your customer service reps on social must have the power to give a little when the situation warrants. Don’t make an already angry customer wait two days for managerial approval. Swift and as generous as is needed to save the relationship is what’s called for.

In addition to keeping a customer from raising a public fuss, there’s another benefit to making contact on social. Rosetta Consulting says that people are 7 times more likely to respond to your promotions after you interact with them in a meaningful way.

Do you want to land on the naughty or nice list this holiday season? Don’t leave it up to your customers to decide. Be proactive and handle those social media comments as soon as they pop up. If you can control the game in December, the rest of the year will be as smooth as the snow on Christmas day.