Social Commentary or Snark? Airbnb embarrasses everyone with their SF street ads

Social Commentary or Snark? Airbnb embarrasses everyone with their SF street ads 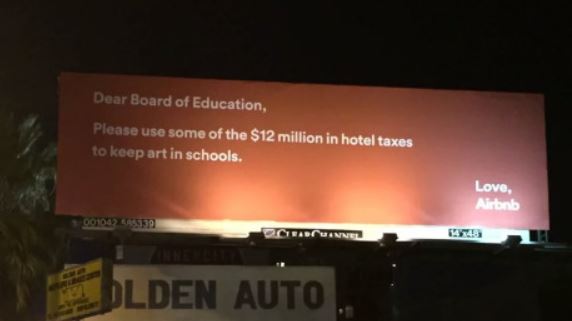 Dear Board of Education,

Please use some of the $12 million in hotel taxes to keep music in schools.

It would be wonderful if the Board of Education in San Francisco could find the money to put a music teacher in every school. Music is good for the mind and soul.

We’re behind you 100% on this Airbnb, except for one thing – when you turn a statement like that into a bus shelter poster it feels a little more like a snarky protest than an honest push for the betterment of our schools.

When you consider the poke at the Public Works department in favor of more bike lanes and the Public Library System plea to use some of the $12 million to keep the doors open longer, it definitely sounds like the start of a revolution.

The odd, Airbnb posters began popping up in San Francisco early last week and they quickly became a point of conversation and embarrassment. Some people thought the posters were a hoax or a strange way of announcing a huge donation to the city from the accommodation matching startup. It couldn’t be real because ad campaigns are supposed to make people want to use your service, but the disgruntled feel of these ads makes it seem like Airbnb dislikes its city of birth and that’s a problem.

It didn’t take the company’s CEO Brian Chesky very long to acknowledge the misstep. According to CNET, Chesky sent an apology email to employees just a day after the posters appeared. “We failed you, our community, our brand and our hometown”, he said. The campaign was not inline with Airbnb’s corporate values and he vowed to make it right with the organizations that were dissed in each ad.

We’d like to think that the campaign was a modern, disruptive company’s attempt to affect real change in the city. Unfortunately, it’s hard to see it as anything but a nasty response to a large tax bill the company felt it didn’t deserve.

Since its inception, Airbnb has been fighting to set itself apart from standard hotel accommodations to avoid having to conform to restrictive regulations that don’t wholly apply (depending on who you ask) such as the city’s 14% hotel tax. After avoiding the tax for years, Airbnb was finally forced to pay up including penalties to the tune of. . . you guessed it. . $12 million.

Snarky social commentary might have made the company chiefs feel better for five minutes but it didn’t do anything for the hardworking Airbnb members who are already in deep with the city of San Francisco.

On the upside, there are probably plenty of Airbnb renters who agree with the company’s take on city management and might rent a room as a show of support.

Maybe this campaign wasn’t such a faux pas after all.

What do you think? Did Airbnb let their anger get the best of them, or was community outrage exactly what they hoped for all along? They are a company that thrives on disruption after all. Could be that snarky social commentary is just what they needed to raise their profile in a very busy, crowded city.

2 Comments for “Social Commentary or Snark? Airbnb embarrasses everyone with their SF street ads”