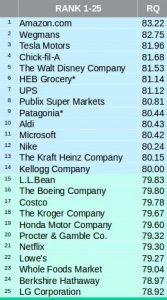 When you think about leadership, vision, profitability and social responsibility; what companies come to mind?

For the third year in a row, Amazon landed on top but its usual cohorts – Apple and Google didn’t make the grade.

A spokesman for the Harris Poll said that Apple’s lack of innovation (in other words “what have you done for me lately”) caused the drop but recent news reports paint a different picture.

“The Apple Store is my own personal hell”

“You don’t know what depression is until you have booked an appointment at the Apple store.”

Ouch. Forget the clean lines and “Genius Bars” – customers simply want to be served without having to flag down an employee or wait 2 hours for their turn.

Google’s diversity scandal certainly helped the company fall, but there has to be more to it to go from 8th to 28th. Perhaps the public is getting nervous about the amount of control Google has over their online life. . . and exactly what are they doing with all of the personal data they collect?

And speaking of personal data, Facebook gained a little ground this year, but they still came in at #51 on the list. That’s crazy, considering how much time the average person spends on Facebook. Would you spend that much time with a friend who was 51st on the “who do you trust” list?

One company that shot up in the ranks this year is Tesla Motors. With their highly-visible CEO Elon Musk shooting cars into space and digging futuristic high-traffic tunnels, it’s a wonder the company only came in third.

But it’s not all pie in the sky. According to the Harris Poll, Americans are even more in love with the simple chain stores that fulfill our basic needs. Four of the top 10 companies are grocery stores. Fast food wunderkind Chick-fil-A came in 4th, right above The Walt Disney Company. Making the top ten for the first time is clothing retailer Patagonia, who made the grade thanks to their commitment to the environment and overall sense of corporate responsibility.

On the opposite end of the corporate responsibility scale, we have The Weinstein Company and Japanese Auto parts supplier Takata (99th and 100th respectively). Both companies have been involved in history-making (for all the wrong reasons) scandals involving sexual misconduct in the Weinstein case and airbag deaths for Takata.

Wells Fargo and Equifax have a long way to go before they are released from the bottom ten. And they’re joined by The Trump Organization in the bottom five.

What we learn from all of this is that the public is paying attention. They know about the scandals, but they know about the good behavior, too. Sure, they want products that work and good customer service, but they also want to know that the companies they support are socially responsible and that they care about their employees.

Remember this; The Harris Poll only deals with the top, most recognizable brand names in the country but if they conducted a poll of small businesses in your area, where would you land on the list?

Emotional Appeal. Products & Services. Social Responsibility.  Vision & Leadership. Workplace Environment. Financial Performance. Are you an innovator like Amazon? Slipping like Apple or in the doghouse like Wells Fargo? If you’re anything less than top ten, it’s time to make some changes in how the public views you and your business.