76% of marketers are active Twitter users, but find LinkedIn twice as effective

76% of marketers are active Twitter users, but find LinkedIn twice as effective

Facebook claims to be the king of social media land but for B2B marketers, it’s barely a blip on the radar. According to B2B Marketing’s 2015 Social Media Benchmarking Report, marketers think that LinkedIn is by far, the most effective social media platform. 58% of marketers put LinkedIn on top. The next closest social network was Twitter with 24% of the vote.

Facebook? Only 9% of marketers thought the massive social network was an effective way to connect with other businesses.

We are talking B2B here, so none of that should come as a surprise. But how about this? When asked which platforms they were most active on, the majority (76%) said Twitter with LinkedIn coming in second (71%) and YouTube coming in third (47%)

If LinkedIn is such an effective platform for networking, why are marketers spending all their time on Twitter? Probably because Twitter is easily conquered. Look at the other chart from the B2Bmarketing infographic; 3 out of 5 marketers are using social media on the fly rather than as a strategic part of a well-thought out plan.

That’s the part that is troublesome. Sounds like there are a whole lot of B2B marketers wasting their time throwing spaghetti at a social media wall. That might not lead to a bad reputation but it could lead to no reputation at all — which in some ways is even worse. 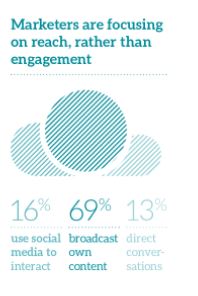 90% of the marketers in the study did say that they plan to increase their use of LinkedIn over the next year. LinkedIn has added more content sharing options for individuals with profiles but it needs to expand options for company pages. As an individual, I can set myself up as an expert in a topic by posting articles and joining group discussions. Companies can’t do either of those things so it’s much more difficult to drive traffic to your page.

On Twitter, everyone is equal – companies, brands, and individuals. You can sign in as any type of entity, even as a fictional character, and set yourself up as an expert.

I think the B2B marketers who responded to this survey were wrong. LinkedIn may be the most effect way of locating potential clients and introducing yourself but if you’re trying to build or change the reputation of your company as a whole, you’ll get further, faster with Twitter and YouTube.

What do you think? If you could only use one social network to establish what your company stands for, what platform would you use?