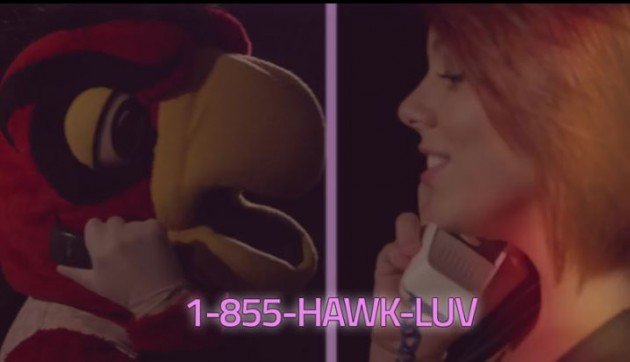 When secret affair dating site Ashley Madison was hacked, it wasn’t just the company that suffered. The reveal ruined the lives of more people than we’ll ever know. Some were served with divorce papers, others lost their job and a few Ashley Madison users even went so far as to commit suicide after being outed to their loved ones.

Sounds like the makings of a great marketing campaign doesn’t it?

The head of the Atlanta Hawks basketball team thinks so.

Marketers for the team found several people whose real names are Ashley Madison then created a provocative video with the tag line: The real Ashley Madison wants you to start a new love affair with us.

The real Ashley Madison wants you to start a new love affair with us: http://t.co/ojovM50l2a pic.twitter.com/oDRwikItjP

“We are targeting a young ticket buyer and inviting them to start their season-ticket relationship with a 10-game package, so the idea of starting your love affair with the Atlanta Hawks is what spawned the Ashley Madison idea.”

Apparently, the Hawks believe that young ticket buyers will be tickled by the topical parody. But this is a family-friendly, sports franchise, not Saturday Night Live.

At this point, you’re expecting to hear about the social media outrage. Well, you’ll have to listen very hard because oddly, there was very little. Most of the Twitter responses I found called the ad campaign funny and pure genius. An article on a sports site said the team needed to do whatever they could to get more people to the games – so good job.

There’s no word on whether or not ticket sales have increased but does it matter? Even if you could double your sales, how does a company feel good about profiting off the misery of others? Is this really what you want your brand to be known for?

The trouble with events like these is that they become part of the language. Even now, weeks later, most people will understand the implication if you slide the name into a conversation. Once we reach that stage, it’s fair game for everyone – from late night comedians to trendy brands who want to stir up controversy.

Maybe what everyone needs is a reality check. Jamie Tworkowski founder of “To Write Love on Her Arms”, a non-profit dedicated to helping those suffering from depression, posted a poignant piece about the aftermath of Ashley Madison. With the daughter of one of the suicides beside him, he tried to persuade the Hawks to stop running the campaign.

There is one other victim in this mess – the poor person whose real name is Ashley Madison. I suppose there’s some justice in the fact that three of them are now being well-compensated (I hope) for this unfortunate twist to their lives.

What do you think? Is this brilliant marketing or a step too far?