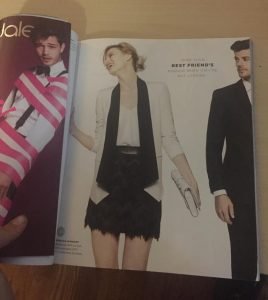 Peruse the 2015 Bloomingdale’s holiday catalog and you’ll find super gift ideas, sparkly holiday sweaters, sharp party close and a bit of advice on how to top off the evening.

“Spike your best friend’s eggnog when they’re not looking.”

The text appears between the image of a laughing woman who is looking away and a man gazing at her with a lecherous look in his eye.

When the catalog copywriter came up with the idea, I’m sure he was thinking more along the lines of frat house fun than felony kidnapping, but combined with the images it looks a lot more like the later.

Once the catalog page hit the net, it was all over for Bloomingdale’s. The social media crowd took over voicing their concerns, their disgust and their outrage.

Bloomingdale’s has since Tweeted their apology but this faux pas goes beyond a bad Tweet. The catalog is out there and can’t be deleted or recalled. If the din gets loud enough, copies will probably end up as the prize in an eBay auction.

We heard your feedback about our catalog copy, which was inappropriate and in poor taste. Bloomingdale's sincerely apologizes.

But how did this concept make it to the public in the first place? This wasn’t a typo or the work of some angry intern. This was part of a plan. Could it be that the entire Bloomingdale’s advertising department is that naive or that behind the times?

Bloomingdale’s could have saved themselves the embarrassment if they’d simply had the head of their social media team (I assume they have a head of social media) look at the catalog before it went out. Anyone who spends their day on Twitter or Facebook would have instantly picked that page out as gasoline on a flame.

What do you think? Is there any scenario where that line of text is funny and appropriate? If not, is a Twitter apology enough to make this right?