Can Starbucks’ Race Together campaign be both wrong and right?

Can Starbucks’ Race Together campaign be both wrong and right? 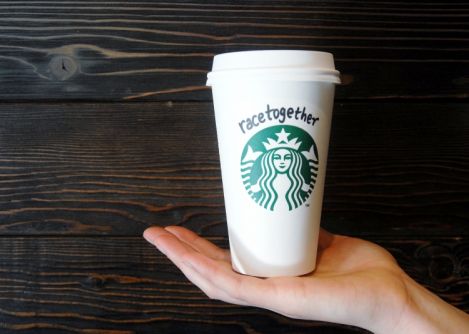 Starbucks’ new “Race Together” campaign has been called both brilliant and horrendous leaving us to wonder if a campaign can be both at the same time.

There’s little doubt that it comes from the right place. It all began when CEO Howard Schultz asked partners (aka employees) at a company open forum to discuss the issue of racial tension in America.

For more than an hour, Starbucks employees representing various ages, races and ethnicities passed a microphone and shared personal experiences. “The current state of racism in our country is almost like humidity at times. You can’t see it, but you feel it,” said one partner.

Schultz then moved on to other cities where more partners shared their painful stories. With each story, the company’s commitment to do something about the problem grew and grew and from that Race Together was born.

The concept: by writing the words Race Together on a Starbucks cup, baristas (aka counter workers) could start a dialogue about race with their customers. Dialogue is the first step to understanding but will we really find the solution to this age-old problem at our local coffee shop?

As good as his intentions were, even Schultz couldn’t have been surprised when his idea was ridiculed and bashed on social media.

People felt that the campaign trivialized racial problems while others thought it was just ridiculous to expect any type of meaningful conversation with a bored, teenaged worker.

WOW! Just walked into my local #Starbucks & there are folks having a great conversation about race relations! Said no one ever.#RaceTogether

Others pointed out the fact that Starbucks needs to clean up its own house before trying to solve the problems in the world.

Starbucks: Nothing Says #RaceTogether Like Only Hiring 3 People of Color Out of 19 Executives. pic.twitter.com/7m1zl4ghQo

The backlash got so bad, Corey duBrowa, the senior vice president of communications at Starbucks deleted his Twitter account for a brief period.

“. . last night I felt personally attacked in a cascade of negativity. I got overwhelmed by the volume and tenor of the discussion, and I reacted. Most of all, I was concerned about becoming a distraction from the respectful conversation around Race Together that we have been trying to create.”

I’ve been there where he was, on the other end of an internet attack. You can repeat the old sticks and stones mantra all you like but it’s not true; words on a screen can really hurt you.

In this case, those on-screen words are going to translate into real world awkwardness when you get served your morning coffee. Hopefully, no one will take it out on the guy who dutifully wrote the words on a grande mocha latte cup.

The biggest problem with rolling out a concept like this is that your average person doesn’t want a side order of guilt with his coffee. The wording on the cup may be positive but there’s no getting around the fact that it’s there because we all can’t learn to get along.

It may not seem like it, but Starbucks is actually winning right now. Why? Because they set out to get us all talking about racial issues in America and that’s exactly what we’re doing. Some people are doing it with sarcastic Tweets and Photoshop. Others are using it as comic fodder and you know the writers over at Saturday Night Live are working on a funny but pointed commentary for Weekend Update.

Yes Starbucks, it appears that your campaign is both right and wrong at the same time. Kudos to you for getting us all riled up.