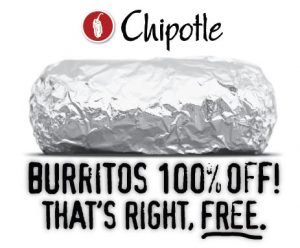 Chipotle is hoping to earn back your trust with a coupon for a free burrito. It’s a generous offer that could potentially cost the company 70 million dollars if all of the coupons are redeemed. Will it be enough to put Chipotle back on a profitable path? Depends on who you ask.

Chipotle says their test round of freebies did indeed help increase sales, so they’re confident that this second push will get them back in the black.

But according to a survey by The Drum, Chipotle’s “never going to eat there again” score is climbing, even after the first round of freebies, popping back up to 15% after dropping to 11% in January.

It does feel like a bit of a stretch; we promise you won’t get sick eating here and to prove it, here’s some free food. What a tempting offer.

This isn’t the first time Chiptole has tried the “free food” as an apology program. In January of 2015, they gave anyone who was willing to try a tofu bowl a coupon for a free meal on their next visit. Why push the tofu?

Chipotle’s tofu push comes on the heels of an apparently unrelated carnitas shortage. Earlier in January, Chipotle announced it had been forced to temporarily stop serving the topping at around a third of its restaurants after finding that a pork supplier had failed to meet its animal welfare standards.

Failing to meet animal welfare standards? But that wasn’t the end of their troubles. A customer posted a Tweet about the free food for tofu triers offer and got his reply from Chipotle employee James Kennedy.

“ChipotleTweets, nothing is free, only cheap #labor. Crew members make only $8.50hr how much is that steak bowl really?”

Kennedy deleted his Tweet after his supervisor told him that it violated company policy which forbids employees from posting disparaging remarks on social media. Two weeks later, Kennedy was fired and shortly after he sued.

Now, on the eve of the next big free food push, a judge has ruled against Chipotle, saying their social media policy violates federal laws. The company has been ordered to pay Mr. Kennedy back wages and rehire him if he wants his old job back. (He doesn’t.)

If that wasn’t bad enough, the judge also ordered the company to post signs informing employees that the (old) social media policy was illegal. Which should open up the floor to even more disgruntled employees who want to take their case to the people’s court.

Time to examine your social media policy. Are you telling employees that that they can’t speak out against the company? If so, you may be opening yourself up to a very public lawsuit.