Delta safely lands its reputation thanks to CEO’s Twitter apology

Delta safely lands its reputation thanks to CEO’s Twitter apology 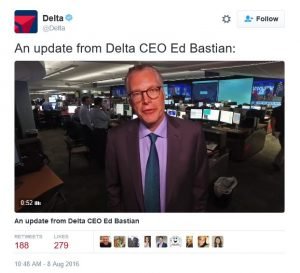 As of last week, Delta had a reputation as one of the most reliable airlines with an impressive record for on-time performance and flight follow-through. Then, a power-outage hit their main computer center, making it impossible for ticket agents in airports around the world to process passengers.

It took six hours to get the computers back on line and then the company was stuck with a backlog like you wouldn’t believe. Over 700 flights canceled, a huge number of passengers stranded in airports all around the world and an even larger number trying to make new arrangements to get where they wanted to go.

As usual, passengers used social media to express their displeasure while others used these same channels to make light of it all.

Then, something very unusual happened; Delta’s CEO Ed Bastian stepped in front of the cameras for a Twitter video apology. He explained the reason for the “ground stop”, assured the world that Delta was “all hands on deck”, and he apologized for the “challenges” the stoppage had created for Delta passengers. He also announced that Delta would be waving the typical ticket change fees for anyone needing to – or wanting to – book a new flight. (The video was also posted to Facebook.)

Delivering an explanation and apology via a Twitter video was both unusual and smart. It’s reasonable to assume that the majority of the affected are on the go, so a short and sweet social response is an excellent choice. They can read that lengthy legal / PR email when they get home.

I also like that Bastian put himself out there during a time when I’m sure he didn’t have the time to spare. He could have sent out a press release or let his social media team keep responding with those canned “we’re sorry” replies. But with a single, one minute video, Bastian shouldered the blame and told every customer that he was going to make it right.

The response was mostly positive with customers saying he handled it just right.

excellent example of modern #CX CEO on Twitter with video instead of PR statement. Well done on how to deal with this in modern way

Some, took the opportunity to ask how a company like Delta could be waylaid by a simple power failure. Good question. It sounds like the plot of a disaster movie; Blackout in the Sky! Luckily, the outage didn’t affect any of the planes in the air, so this was never a matter of customer safety — just customer service.

And speaking of customer service, Delta finished out the evening by acknowledging that even a sincere apology isn’t enough.

Delta will provide $200 travel vouchers to all customers who experienced a 3+ hour delay or cancellation today. https://t.co/ZUbkhXmrvr

That graphic is the smartest piece of crisis communication we’ve seen a long time. Looks like Delta will get through this one with their reputation in tact.