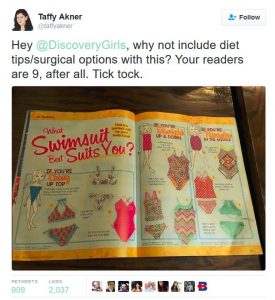 The latest edition of Discovery Girls magazine is creating quite a stir. Some parents were offended by an article which offered body-conscious swimsuit advice to pre-teen girls. The article, which mirrors what you’d find in almost any woman’s fashion magazine, suggests minimizing larger areas of your body by choosing a suit that draws the eye to thinner spots.

Too curvy on top? Pick a suit with side cutouts to draw the eye down. I can’t imagine that too many 8-year-olds have a problem with being “too curvy on top”, but that’s not the point of this piece.

The parents were upset because they felt the article put too much emphasis on body image. They went wild on social media and from there the story became big news.

Discovery Girls publisher, Catherine Lee knew she had to make a public statement to save her magazine’s reputation, unfortunately her open letter on Facebook only made things worse.

Instead of copping to making a mistake or, heaven forbid, defending the magazine’s position, Ms Lee did a most curious thing. She threw her staff under the big, yellow school bus.

“It’s still hard for me to believe that an article so contrary to our magazine’s mission could have been published on our pages. I have been a loss for words for days.”

I’m sure the publisher of the magazine doesn’t sign off on every issue, but there are still several levels of editors before a mag goes to print. How did a half dozen people miss an article that was “so contrary” to the mission?

She goes on to say,

“The article was supposed to be about finding cute, fun swimsuits that make girls feel confident, but instead it focused on girls’ body image and had a negative impact.”

Gas on the fire. The already angry parents were even more upset at the implication that children need the right outfit to feel confident.

The open letter then goes on at length about a Discovery Girls book devoted to the topic of body image. Five years to write it. 20,000 girls interviews! Vitally important to all of us. . . and yet. . .

Ms Lee wraps up with this:

As much we like to think that something like this would never happen to us, it did. We’re not immune to making mistakes, but we are always willing to get better and learn from our mistakes. We’d like to thank the readers who contacted us to let us know they couldn’t believe we could make such a mistake.

All-in-all, a 450 word apology on Facebook that actually made things worse.

It’s crisis communication time. Let’s all learn from this.

Any other advice you’d offer to Ms Lee?