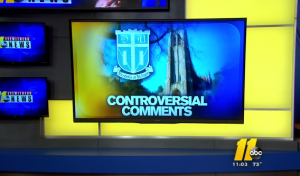 A Duke University professor is in a lot of trouble with both his employer and his students, after leaving a racially-charged comment on a New York Times editorial.

The comment included use of “the blacks” and “the asians” which has caused another black eye for a university which only recently had to handle the outrage of a noose left hanging on campus.

While Professor Jerry Hough likely thought he had a right to share his personal comments on a news story, he didn’t take into consideration what just about everyone else with an internet device and an opinion has learned over the past few years:

“He represents the whole school in that one comment and that’s not a good image for the school,” said Duke student Virginue Marchand. “It’s really inappropriate.”

“You kind of want to be cautious, to make sure you don’t offend anyone,” said Duke student Xavi Ramos.

Both sound pieces of advice. Whenever you leave a comment online–whether on a post, in a tweet, or even an Instagram photo–you need to be careful no to offend anyone lest your actions soil the name of your employer.