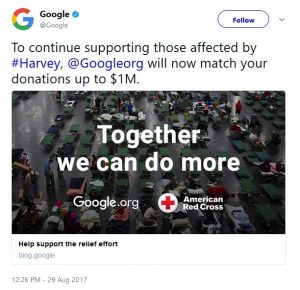 A natural disaster like Hurricane Harvey always brings out the very best and the very worst in people. The same goes for companies of all sizes. While many companies are pitching in with large donations of cash, manpower or badly needed supplies, other companies are making the news for all the wrong reasons.

1st prize for the biggest blunder goes to Best Buy who was caught price gouging in the flood zone. Reporter Ken Klippenstein went viral with an image showing a $42 price tag on cases of Dasani Water. Can’t handle that? A case of Smart Water is only $29 – but hurry (says the sign) because supplies are limited!

We all understand the law of supply and demand, but during a crisis it’s always better to give than to receive.

More than 3,000 people retweeted the post in just 48 hours leaving Best Buy’s corporate office with quite a mess on their hands. In their rebuttal statement to the press, Best Buy said it was a mistake that happened when an employee multiplied the individual bottle price by the number of bottles in the case. Since they don’t unusually sell water by the case, this was an easy mistake.

The easiest way to correct the error? Don’t put a price on the water at all! Donate it to people who need it. Or give it away to everyone who comes into the store because it’s hot out there! It’s not a flat screen TV, Best Buy; it’s water.

Even if we take Best Buy at its word, that this was a simple mistake by an untrained worker, and not an act of price gouging, it doesn’t make things better. As we’ve said many times before, it’s not the reality of what you do, it’s how people perceive your actions. If it seems like you’re being mean, that’s the impression people are going to walk away with.

Think about it this way; how many people have seen (or will see) that price gouging photo vs the number of people who have read Best Buy’s apology?

Takeaway Tip: when a national tragedy consumes our county, reach out to all of your employees with a plan of action. Solicit ideas for how to help and assign a point person to handle donations. From Maine to Hawaii – what’s happening in Texas is on everyone’s mind, so its no time for business as usual.

Talking about perceptions, let’s discuss perceived indifference. This is when it appears that a company or celebrity is blatantly ignoring a disaster that has captivated the world. Here you are, scanning your Twitter feed; scrolling through dozens of flood images and pleas for help. Then you hit a post from Miss Celebrity Star who can’t wait to show off her new $3,000 designer shoes! Ouch.

It could be that her post was scheduled by an assistant long before the rains came. Miss Star might have secretly donated $10,000 for flood relief, but all her former fans are going to remember is her celebration of consumption while so many have lost everything they own.

Takeaway Tip: when tragedy strikes, bump or delete all of your scheduled posts. That cookie recipe might not offend anyone but no one will pay attention to it, either. Play it safe and use your channels to share helpful information and news about how your company is responding.

Right now, a lot of retailers are responding by running “percentage of sales” campaigns. Some are donating a percent of all sales on a specific date. Others are giving away all of the profit on specific items. These programs help consumers cut through the donation confusion and “give now” fatigue. Donating through a favorite retailer, or even a celebrity crowdsourcing campaign, makes people feel like they’re part of something big. Oddly, it feels less anonymous to buy a bracelet where 10% goes to charity than to donate money directly to the Red Cross.

Another reason consumers like these campaigns is that companies often match the donation, so a small donation goes a long way.

There are two potential pitfalls with this type of public offering; breaking the consumer trust and benefiting from a natural disaster.

“Percentage of sales” campaigns must be carefully worded so it doesn’t look like it’s a ploy to bolster sales. One way to do this is to choose a charity that fits your brand. For example, if you sell children’s clothing, donate the money to The Texas Diaper Bank. Restaurants could give the money they collect to a food bank.

Whatever charity you choose, be transparent. Your customers are taking you at your word, that the money they’re donating through their purchase will actually get to the people who need it. Be upfront about when, how and to whom you’ll be donating. After the fact, post a follow up online with the numbers and a quote from the agency that received the funds.

People want to help, but they’ll hold it against you forever if they feel like they’ve been duped into giving under false pretenses.

A final reminder; the crisis in Texas is going to continue long after the rains are gone. Helping now is wonderful but helping again a month from now, or two months from now, will earn you a gold reputation star from us.

Business is business; but when disaster strikes it’s time to put people way ahead of profits.

Here are a few companies who are doing just that:

People’s report on fashion and beauty brands who are donating

Health brands who are donating

Donations from items unique to Texas