Reality show contestant stripped of his title but who is the real loser; Tim or Ellen DeGeneres?

Reality show contestant stripped of his title but who is the real loser; Tim or Ellen DeGeneres? 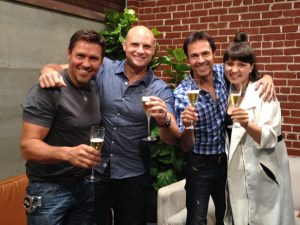 Earlier this week, Ellen DeGeneres publicly and gleefully besmirched the reputation of an up and coming furniture designer in the name of good entertainment. Now that the sawdust has settled and the two parties have had a chance to talk, the tables have turned and it’s now the fun and funky talk show host who is taking the hit in the old reputation.

How did this happen? Let’s turn back the clock and see.

It all began when Ellen DeGeneres decided to produce her own furniture design competition show for HGTV. Each week, the constants on Ellen’s Design Challenge were tasked with creating an innovative and original piece of furniture within the challenge specifics.

One by one, constants were eliminated until it was down to Tim and Kate. In the final challenge, the two were asked to build something with a wow factor and they did. Tim’s piece was amazing. The judges loved it, chose it and then, on Ellen’s show in front of a live audience, Tim was named the winner. Balloons, confetti, tears of joy and a check for $100,000; all for Tim.

But when the show aired for the rest of the world to see, the ending had a twist. A twist that Ellen had gleefully alluded to on Twitter. The words “One Week Later” came up on the screen and then we were told that Tim was disqualified because his piece was too similar to another designer’s work. Kate was named the winner.

Sure enough, Tim’s piece does look a lot like a piece by a man named Simon Schacht. 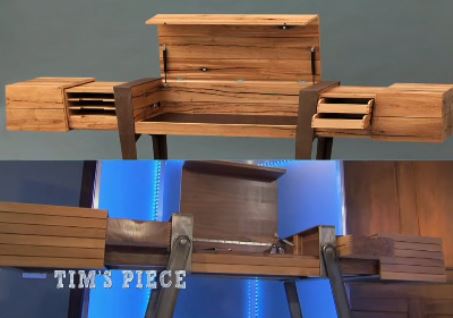 As if winning, then losing, $100,000 wasn’t enough of a shot to the heart, Tim also had to deal with the blow to his reputation. The man makes a living selling his designs but who is going to buy from him if they think he’s stealing other people’s work?

But is that what really happened? No one believes it’s true. What’s more likely is that Tim saw a photo of the piece at some point and it stuck in his head. He says he doesn’t remember ever seeing it and I believe him. It happens. Artists can’t help but be influenced by what they see. Are there any truly original concepts left in this world? Just check the movie listings or the TV Guide for the answer to that question.

Stripping Tim of his title on national television sounds like a terrible thing to do. The producers could have kept the mistake in the family by filming Kate as the winner and airing that portion instead. (It was filmed in front of a live audience but aired days later) But no, they chose to show Tim’s humiliation because it was good for business – show business.

By airing the whole affair, the producers turned a niche series finale into a media event. Suddenly Ellen’s Design Challenge was on everyone’s radar but it wasn’t Tim who took the next public beating, it was Ellen.

The tip-off that led to the disqualification was emailed anonymously to Ellen before the segment aired. The show claims that coincidentally, someone in the small studio audience happened to recognize the piece and felt compelled to report it. By why anonymously?

Since then, Ellen has drawn out the press coverage by teasing a response from Tim, then airing that response on TV. In her interview with him, she says she still believes in him and wants to work with him in the future. Another odd thing to say after you called him a thief in public.

At this point, it’s Tim who is winning the war. People feel sorry for him and he’s racked up billions of dollars in free advertising for his business. Rather than be hurt by the incident, it looks like he’s going to come out okay – just without the $100,000.

As for Ellen, she’s still got a lot of explaining to do. The entire incident feels like a publicity stunt and no one is happy with the way the situation was handled. One has to wonder if there isn’t a lawsuit in the works. And what effect will this have on a second season of the show? Scandal is good for ratings, but HGTV might not want to have their name associated with such a public mess.

The big issue is that there are always two sides to a story and when you’re taking shots at someone’s reputation both sides usually lose.

Good publicity or not, Ellen shouldn’t have used her family-friendly forum to call out a small business owner as a liar and a cheat.

What do you think?

Share the post "Reality show contestant stripped of his title but who is the real loser; Tim or Ellen DeGeneres?"