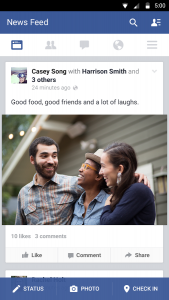 On Facebook, a click is more than just a click; it’s a declaration of interest and it sets off a chain of events that rivals the most complex Rube Goldberg machine ever made.

In the few seconds it takes for you to scroll to your next post, tiny Facebook bots have scoured the site for similar posts, taking into consideration your relationships, sharing history, previous comments and general affinity for a topic. They line these posts up in order of preference – your preference because those little bots are incredible mind readers – and feed them to you without a single break in the action.

It’s pretty amazing but it’s not always right. The trouble with putting so much emphasis on clicks is that it tends to favor click baiters and scammers. Facebook just realized this and now they’re using a combination of criteria to help decide which posts you’ll see and see first on your News Feed.

They’ll continue to quantify your likes, shares and clicks but now they’ll also factor in the posts you want to see at the top of the list. The weird part is, they aren’t going to ask you what you want to see. They’re going to surmise your preferences based on the preferences of the new Feed Quality Panel. And this makes sense because clearly, we all love the same kinds of posts so why not let total strangers decide what’s best for me?

In other words, they’re still just guessing rather than let us all take control of our own content-driven destiny.

How will this affect the visibility of your Page posts?

When I read that, all I can hear is the Scarecrow in the Wizard of Oz; ‘some people do go both ways!’

Pages might see some declines in referral traffic if the rate at which their stories are clicked on does not match how much people report wanting to see those stories near the top of their News Feed. This update helps rebalance those two factors, so people are seeing relevant stories to them.

This is where they warn posters not to try to game the system by “encouraging people to take an action (such as encouraging lots of clicks).”

What Facebook appears to be saying is that if you post content people genuinely want to see, then it will naturally rise to the top. Even if people simply read your posts but don’t engage in anyway, you’ll still be rewarded for good behavior.

This is quite a departure from engagement is everything. Perhaps this is why Facebook has removed the prominent engagement column from the Insights dashboard.

If this new system works the way it’s supposed to, it’s good news for brands who deliver quality content and bad news for companies who use controversial posts and drama to attract attention.

What it also means is that it doesn’t matter how many followers you have, Facebook is still in control of how many of those followers see your posts on any given day. It’s out of your hands. Don’t sweat it.