You use Facebook every day to keep up with family and friends. Your Facebook Page helps you engage with your customers and those Facebook Groups you belong to are a constant source of new leads. All is well in the social media world. Then, one day, you log on to Facebook and you get that message: Your account has been disabled. 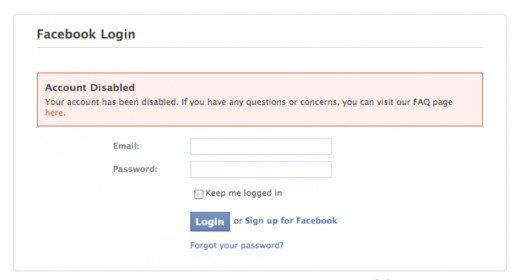 Why? What did you do wrong? You follow the FAQ but that’s no help. All you can do is call Facebook and try to get the situation resolved. In the meantime, you’re not only locked out, but everyone who comes across your profile or one of your posts will see that you’ve been banned. Are they going to assume it’s a mistake or assume the worst?

Most of the time, the action happens because someone reported you (correctly or not) or you’ve done something to make them doubt your identity. I was banned for contacting too many strangers via Facebook messaging. I was acting on behalf of a Facebook game and the “strangers” were expecting my message, but that didn’t stop Facebook from labeling my actions as ‘suspicious’. I was required to jump through flaming hoops in order to prove my identity. Which doesn’t make sense, since I could be “me” and still be suspicious.

OnlineCensorship.org recently posted a study involving Facebook takedowns. Though their participant numbers are slim, I don’t doubt the pattern that emerged.

Facebook had more takedowns than any other social media channel. The majority post removals were violations of the nudity rules, which aren’t as clear as you’d think. The guidelines say fine art is fine but artists and photographers have had their accounts deleted over nude images. It’s also a problem for pages devoted to sexual health, breastfeeding and bras. 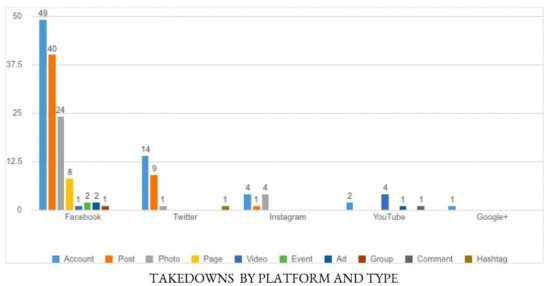 When it comes to full account shutdowns, those were mostly due to identity issues. Unlike the other channels, Facebook requires you to use your real name on your account. When I had to prove who I was, Facebook made me change my account name from my maiden name (which I use when I write) to my married name. It was confusing to my followers and made a mess of my brand.

According to the OnlineCensorship.org report, 40% of those who appealed the decision never received a reply from Facebook. Others said they didn’t even realize that an appeal was an option. In some cases, those who were banned refused to comply with Facebook’s rigorous proof of identity standards. They saw this as an invasion of privacy.

Time for an important caveat: the data in this study was self-reported. The organization hosted a reporting site and asked people to report when they were involved in a social media takedown. There was no control group or median group of social media users in the mix. These numbers come purely from people who felt they’d been wronged and were compelled to talk about it.

What’s particularly disturbing is the why behind the ban. It appears that a few accounts were flagged after the owner posted a controversial message. Since you can’t have someone banned because you don’t like their politics, smart visitors raise the identity flag instead. Facebook does the takedown and the account stays down if the person refuses to show their proof.  Insidious, isn’t it?

As bad as all of that sounds, there’s one important fact to remember: the Constitution does not guarantee you the right of free speech on Facebook. Facebook is a business that allows you to talk, share and advertise your business for free. All they ask in return is that you view some ads and play by the rules. It’s their playground, so they get to make the rules and enforce them as they see fit. Even if it appears willy-nilly to the rest of us, it’s their game.

Are takedowns frustrating? Yes. Can they hurt your business? Yes. Can you do anything to stop Facebook from deleting your profile or page? Honestly – not really. Remember that, if you’re thinking of putting your entire business on a site you don’t own.