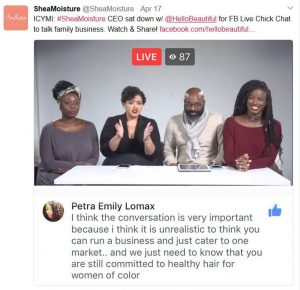 There are thousands of companies in the United States with small, but intensely loyal, followings. Often these companies start out with one product that truly hits the mark, then they expand their product line to include other items that speak to the same target audience. From there, the small business grows and grows and then plateaus and plateaus. It’s at that point that the company has to make a decision; keep on catering to the same audience and give up on growth, or expand the brand to include a different target market.

Most will vote for expansion, but that comes with a price. A price that could wipe out all of the loyalty and goodwill you gained in the growth years.

This is what happened to Shea Moisture. The company has been making and selling natural beauty products aimed at a multicultural audience since 1912. Their core customer base is primarily women of color, but the company’s CEO Richelieu Dennis has been actively trying to expand the brand in several ways.

First, he fought to end segregation in the beauty aisles.  Instead of putting products like his in the “ethnic” section, he pushed to have them included with the usual suspects. His #BreakTheWalls campaign received more than 300 million impressions on social media. His second step also received a lot of attention, but for all the wrong reasons.

It wasn’t the hair Shea Moisture’s current customers hated, it was the ad which heavily featured a very pale set of redheads and a blonde. Suddenly Shea Moisture was dealing with backlash whiplash. Those vocal and loyal customers were now just as vocal but not in a good way.

“To know/hear that Black women marketing and social media experts advised that you not forget your target audience in your ads and ‘new’ marketing outreach (hint: many of us in NYC media know each other and we TALK) and you still chose to ignore this advice and to toss us to the back of the ad as an after-thought will be your undoing. Sad. I’ve only ever bought a couple SM products (but I have bought many others from your family of companies, including Madame CJ Walker brand) but this turn of events will definitely curtail my purchasing with SM….” That comment was written as a response to the company’s very frank and genuine apology. Now that the company’s reputation has taken a hit, they have some big decisions to make. The first is one and done: the video has been taken down. Next, they need to make a new video and they could go one of two ways. They could go back to their core audience and create a video aimed specifically at women of color and risk blowing their chances of expanding into new territory. Or, they could create a video with a better ethnic balance. This seems like the right answer, but creating a 30 second spot that addresses the beauty issues of all different types of women is tricky.

Shea Moisture’s CEO isn’t giving up growth just because his core customers demand it. He is going to slow the boat while giving those customers a little extra love and attention.

“We need to make sure we spend the time engaging with that community, encouraging them, and letting them know that just because we’re growing doesn’t mean they’re less important. in fact, they become more important because they’re the ones who have always advocated for us.”

Therein lies the secret to change. Before you outgrow your current audience, take them into your confidence and empower them to be the ambassadors for that change. This is called keeping your friends close and your potential enemies even closer.