Wow! 20% of “right to be forgotten” requests to Google came from just 1% of requesters

Wow! 20% of “right to be forgotten” requests to Google came from just 1% of requesters 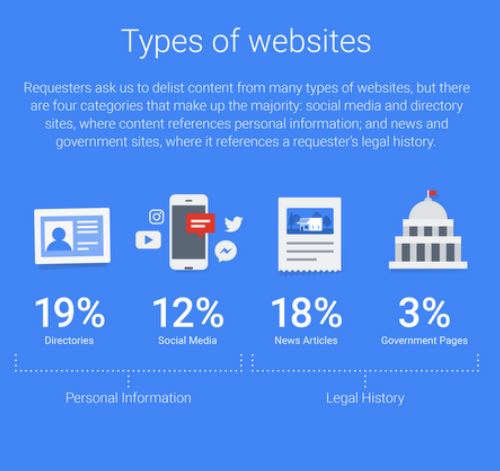 If Google seems a little lighter to you than did a few years ago, it’s not your imagination. Over the past three years, the search engine has delisted around a million URLs at the behest of someone in Europe who didn’t want those links to pop up anymore.

Why would they do such thing?

Because the European court told them they had to.

In all fairness, people can also ask Google to delist pages that give out their home address, detailed financial information, or wrong information that is causing confusion.

This week, Google posted their first “right to be forgotten” transparency report (which sounds like an oxymoron to me) and it’s very interesting.

In the past three years, Google has received 654,876 requests to delist a total of 2,437,271 URLs. 89% of the requests came from private individuals. Most were interested in hiding “professional information” with only a small percentage looking to dodge “professional wrongdoing” (7%) or “crime” (8%).

The requests were evaluated to determine if the “information in question is “inaccurate, inadequate, irrelevant or excessive”—and whether there is a public interest in the information remaining available in search results.”

Using that criteria, only 43% of the requests were granted.

Off all the sites impacted by the removals, social media was hit the hardest. Google has received removal requests for 16,623 Facebook pages, 12,396 Twitter pages, 12,000 Google Plus pages and 9,250 YouTube pages.

It’s also interesting to note that 20% of requests came from 1% of the people. This could be the work of our European counterparts in the reputation management business.

For Google, figuring out which requests to grant and which to deny is tricky. And judging by the example cases in the transparency report, the decision is somewhat – maybe entirely – subjective.

For example, a man in Spain asked Google to delist a newspaper report about his having killed a person with his car. The incident happened 50 years ago, so Google decided to delist because of the time elapsed.

When a public figure in Hungary asked to have articles about his “decades-old criminal conviction” removed, Google said no. Since he’s a public figure, they felt that information should remain as part of the public record.

The award for the most ironic request goes to this one:

A man who was convicted of benefits fraud in 2012 asked us to delist nearly 300 articles related to the conviction based on a document he provided suggesting he was later found innocent of the crime.

We delisted 293 URLs pursuant to the documentation the requester provided. The requester then asked us to delist several other pages related to his separate conviction for forging documents. After re-reviewing the original document he submitted as proof of his innocence in the benefits case, we discovered that it was a forgery. We reinstated all of the URLs we had previously delisted.

That’s right, the forger gave Google forged documents to prove his innocence. Seriously, whoever has the job of following up on these cases in Europe must have the patience of Job.

Here in the US, we don’t have the “right to be forgotten” but that doesn’t mean you have to live with malicious or innocently erroneous mentions on the web. You can’t ask Google for help, but you can ask us.

For over a decade, we’ve helped individuals and companies to clean up their search engine results page (SERP) and present a better reputation to those searching their name. Our reputation experts analyze each individual web page, identify strengths and weaknesses, and then get to work refining your search engine profile so that your Google reputation is squeaky clean. No black-hat techniques, no empty promises, and no long-term contracts. We’ll earn your business from day one and then keep working until you’re satisfied with your Google makeover.

Share the post "Wow! 20% of “right to be forgotten” requests to Google came from just 1% of requesters"