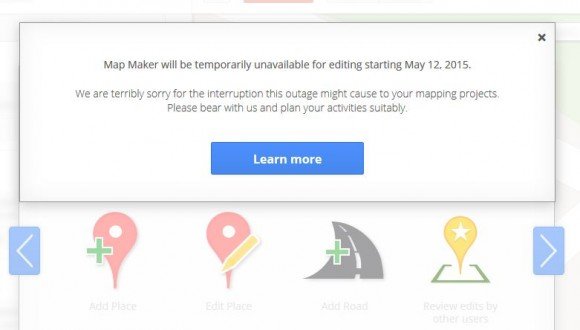 Crowdsourcing is an increasingly popular way to get a large amount of data reviewed in a short amount of time. NASA used “citizen scientists” to identify star clusters in photos from space and last year more than 115,000 volunteers reviewed satellite photos in hopes of finding downed Flight 370.

Up until today, Google was using crowdsourcing to make Google Maps more accurate, that is until one clever fellow decided to insert an inappropriate drawing of an Android relieving himself on an apple. (Get it?)  The discovery forced Google to do away with the auto-approve system which resulted in an enormous backlog of edits that couldn’t be cleared as fast as new edits appeared. To stop the hemorrhaging, Google closed the gates on the Google Map Maker tool.

Map Maker team member Pavithra Kanakarajan says the lock out is only temporary but her Google+ post makes it clear that Google doesn’t have a solution at the moment.

“We believe that it is more fair to only say that if we do not have the capacity to review edits at roughly the rate they come in, we have to take a pause.

We have hence decided to temporarily disable editing across all countries starting Tuesday, May 12, 2015, till we have our moderation system back in action. This will be a temporary situation and one that we hope to come out of as soon as possible.

While this is a very difficult, short term decision, we think this will help us get to a better state faster. More importantly, we believe it is simply the right thing to do to all of you, our valued users who continue to edit with the hope that your changes might go live as fast as you’ve been used to.”

Does anyone else think that Google is over-reacting? I understand that the prank was embarrassing but it’s not like a Map Maker moved Buckingham Palace to the middle of Idaho. Someone could have made a change that actually disrupted lives such as marking highways as closed or rerouting backroads into a river. This was a silly joke that few people would have seen if a blogger hadn’t caught it and shared it.

I don’t have the numbers to back this up but I imagine that the overwhelming majority of Google Map edits are legit and helpful. And it’s not like Google can hire people to walk every square inch of the world. This is exactly the type of project crowdsourcing was made for.

Anytime you ask for user-generated content you’re asking for someone to abuse the system. What you have to do is balance the need for speed with the concern over inappropriate content. We’re a notoriously impatient people; when we submit content we expect to see it go live right away. Holding back often results in more questions by email or on social which eats up more of your time. Moderation after the fact is usually best unless you’re working with a sensitive topic or anything involving children. Just know that you’re going to find a few submissions that have to be removed because they’re inappropriate or simply off-topic.

This Google Map’s thing; I think Google needs to take it on the chin and move on. Will other bad edits slip through? Yes, but it’s a small price to pay for having the most accurate maps on the internet.

There is one other alternative, they could crowdsource clearing the backlog and all future edits. It’s like when we used to trade papers to grade in school. If you check my work and I check yours we can have this mess cleaned up in no time.