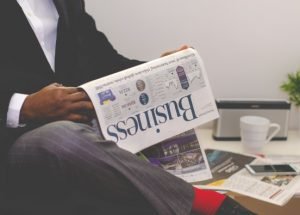 There was a time when we judged a company based solely on the quality of their products and services. Now, having a great product isn’t enough to win over the general public. According to the latest Harris Poll, companies are also being judged by the actions of their leaders and where they stand on the latest hot button issues.

The Harris Poll Reputation Quotient (RQ) score is based on the perceptions of 23,000 Americans. The survey participants were asked to rate 100 companies in six different categories: Social Responsibility, Emotional Appeal, Products and Services, Vision and Leadership, Financial Performance, and Workplace Environment.

Though many of the companies on the list are ones the average consumer encounters on a regular basis (Amazon, Starbucks, Target), many were not – but that didn’t stop the respondents from delivering a strong thumbs up or down. 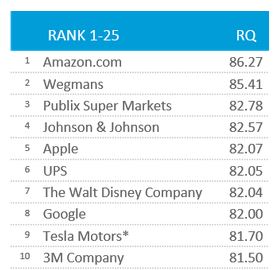 For example, though few people in the US actually own a car made by Tesla, the respondents still give the company and “excellent” rating – high enough to land the progressive car company in 9th place. This is quite something when you note that only 16 other companies earned an “excellent” score. Top finishers include Amazon (in its 9th year in the top 10), Wegmans, Apple, UPS, The Walt Disney Company and Google.

On the other end of the scale were companies who lost precious reputation points this year due to a scandal or large financial losses. 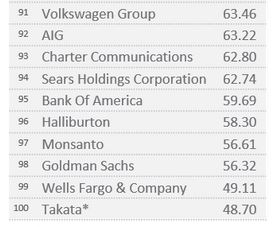 Volkswagen was the best of the worst, landing in 91st place after a horrendous emissions scandal that ended with the arrest of several executives. The good news is that their score  actually went up 8.7 points. Still, when asked which companies caused the most damage to their reputations this year, 9% of respondents said VW.

Charter Communications also landed in the “poor” group thanks to a difference between promises and deliverables.

AIG Insurance and Sears both fell victim to a bad bottom line, but they weren’t the worst of the worst. That honor goes to Wells Fargo and Takata – the only two companies to land on the “critical” list.

Both companies were seen as having crossed the line in the two biggest areas; intentional wrongdoing or illegal actions by corporate leaders (cited by 85 percent of Americans) and lying or misinterpreting the facts about a product or service (83%).

Wells Fargo also takes a hit in the area of “intentional misuse of financial information for financial gain (82%).”

Speaking of leadership, stew on this fact:

Harris Poll’s analysis shows that while Vision and Leadership attributes are increasingly important to reputation equity, an astounding half of Americans rate the reputations of today’s corporate leaders and CEOs as “bad.”

What do we expect from a good leader? We want them to be trustworthy, ethical and accountable for his company’s actions. (Not too much to ask, is it?) We also want them to be curious, visible, bold and a taker of risks.

That last part is tricky, especially when it comes to risking it all to take a political stand. The Harris Poll found that companies who come down on one side or the other of a hot button topic will see their reputation split across party lines.

Chick-fil-A is an “excellent” according to Republicans but only “good” in the eyes of Democrats. Democrats give Target a solid “very good” while Republicans rate the retailer’s rep as only “fair”.

“Values play a bigger role than ever before in corporate reputation, and the business significance of a company’s reputation has never been higher. Consumers are keenly interested in how companies engage with the world, and that includes corporate ideals. As the red versus blue duel of politics impacts corporate reputation, we expect to see more alignment along party beliefs.”

Are your company leaders helping or hurting the company reputation? Perhaps you should conduct your own poll and find out.