Do you know the 6 HiPPOs that can ruin your company’s reputation?

Do you know the 6 HiPPOs that can ruin your company’s reputation?

Oftentimes, the opinion of the big boss overrides the opinions of other staff members – regardless of knowledge or expertise in a particular topic.  The HiPPO, or Highest Paid Person’s Opinion, can be detrimental to a businesses reputation if taken into account over all other information. 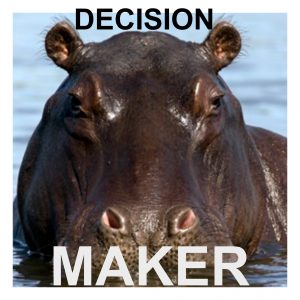 Nearly everyone in the history of employment has fallen victim to the HiPPO attack.  A perfectly planned product launch, client meeting, business expansion, whatever it may be, is right on track for success, and in storms the HiPPO.  Before anyone realizes what is going on, those perfect plans are in a pile on the floor in order to make way for the new plan.  The new plan is often brighter and shinier than the original plan, but it does not always end in success.  You see, the problem with a HiPPO, is after many years of experience and success, regardless of how far removed from a department or specialization they may be, they’re used to being right.  If not actually right, they’re used to being told they are right.

How can one HiPPO damage the reputation of a whole organization?  There are many ways.  Here are a few examples:

These are a few of the better known reputation endangering HiPPOs, of course, there are many more.  What can you do if you feel like your HiPPO is hurting their own brand’s reputation?

First things first, you need to determine what kind of HiPPO you’re dealing with.  If they generally care for the well-being of the organization and the people involved, you’re going to have far more success than you will with someone who’s heart isn’t in it.  If you can get through to them, be prepared to present the facts, with a plan for moving forward.  Often, being able to show someone why something may not work – or why something else may work better – works better than arguing.  Appealing to the boss’ analytic side will also help avoid hurting feelings.

Unfortunately, not all HiPPOs have the organization’s best interests at heart.  If they’re not interested in protecting the well-being of the company, you may be better off finding an organization with a leader who is, unless you’re prepared to go down with the ship.

Are there any other examples of HiPPOs you’ve dealt with?