Director Joss Whedon calls it a wrap on Avengers: Age of Twitter

Director Joss Whedon calls it a wrap on Avengers: Age of Twitter

A few days ago, Joss Whedon deleted his Twitter account. If you’re not a geeky movie or TV fan, you probably don’t know who Joss Whedon is. That’s okay. You’re not alone.

Whedon is the director of the recently released Avengers: Age of Ultron movie. But even more people know him and revere him as the creator of the TV shows Buffy the Vampire Slayer and Firefly.

A fanboy himself, Whedon has always been fan-friendly. I’d go so far as to say that he identifies more with movie-goers than other movie makers. He’s so well-loved by fans that they created a news site dedicated to him. He’s also lovingly referred to as the leader of the Cult of Joss and he’s even in the urban dictionary as the inspiration behind the term “jossed“.

I’m telling you all of this so you understand that this is not a Hollywood phantom who can slink away into the dark shadows of a soundstage unnoticed. Whedon may not be as well known as George Lucas or Stephen Spielberg but his legions are loud and proud. So when Whedon unexpectedly deleted his entire Twitter account on Monday, the outcry was tremendous. Media outlets from Esquire to The Business Insider covered the story with everyone asking the question – why? 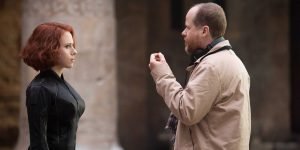 The easy assumption is that he left because he was getting pounded by Avengers fans who thought he trivialized and objectified the Black Widow character in the new movie. Everyone’s entitled to their opinion but it didn’t end there. The backlash escalated into a barrage of hateful insults and threats of violence. Over a movie.

Whedon was a victim of social media bullying. Doesn’t matter that he’s a celebrity or an adult, bullying is bullying and it’s scary and it hurts.

Still, the media spin is making it sound like Whedon is running scared because he can’t deal with criticism. It’s all about how he’s quit Twitter before and how he’s been complaining about working on the film franchise. It’s one ding after another to his reputation as if he should have stuck around and fought back.

From a business standpoint, fighting back is a bad idea. There’s not one thing he could say that would sway public opinion and it’s not like he can go back and refilm the movie. So he did the smart thing – he stepped away. He could have simply stopped posting and reading but the pull of an active social media account is just too strong. So rather than absorb all that negative energy, he walked away.

Yesterday, Whedon told Buzz Feed that it wasn’t the criticism that drove him away, it was just the volume of noise that made him hit delete.

“I just thought, Wait a minute, if I’m going to start writing again, I have to go to the quiet place,” he said. “And this is the least quiet place I’ve ever been in my life. … It’s like taking the bar exam at Coachella. It’s like, Um, I really need to concentrate on this! Guys! Can you all just… I have to… It’s super important for my law!”

He’s right, of course. Even if your Twitter feed is filled with positive supporters, social media is a distraction and for many, an addiction. Which is why Whedon says he’s unlikely to go back to Twitter.

“I need to go out, do the research, turn the page, see the thing, hear the music, live like a person. I’m not great at that. So, oddly enough, because I always feel like I’m the old man who doesn’t get the tech, right now I’m the man who thinks he could do better without it.”

Whedon may have taken a few punches in the rep this week but the Twitterverse is the one coming away with a black eye. And what affect will this have on Twitter’s advertisers? That cute Party City ad with the girl in the Black Widow costume isn’t very enticing when the Tweet right underneath is a death threat.

Do incidents like these make you think twice about advertising on Twitter or is just social media as usual?