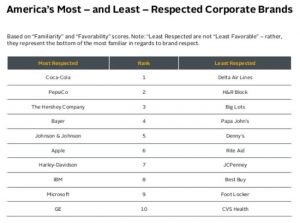 Tenet Partners just released their third annual report on the most and least respected corporate brands. The brands that rose to the top are those you would expect to see such as Coca-Cola and Apple but the least respected list contains a few surprises.

To create the list, Tenet surveyed 10,000 business decision-makers and what they call “opinion elites” on two key metrics: Familiarity and Favorability.

Familiarity is exactly what it sounds like; how familiar are you with this company beyond having just heard the name. Respondents can score a company anywhere from 0 to 100.

The second component, Favorability, is made up of three scores:

The brands with the top scores in both Familiarity and Favorability end up on the Most Respected Brands list.

Coca-Cola took the number one spot but it’s not all good news. Favorability scores for my favorite soda company hit the lowest point since 2011. Overall Reputation scores dropped 3.9 points. If they keep moving this way, they’ll give up the top spot to competitor PepsiCo (currently #2 on the list) or possibly Apple!

Apple came in 6th but gets the award for fastest growing brand. While Favorability fell for most of the top brands, Apple jumped up 1.4 points.

Microsoft landed on the Most Respected list for the first time this year knocking out cereal mavens Kellogg’s. Looks like people just aren’t interested in eating a traditional breakfast anymore.

Also in the top 10 Most Respected: The Hershey Company (who doesn’t respect chocolate?), Bayer, Johnson & Johnson, Harley-Davidson and IBM. That last one surprises me just a bit because IBM still screams 80’s tech to me.

The top 10 Least Respected Brands is a real mixed bag. To make this list, a company had to have a high Familiarity score but a low Favorability score. In other words, they’re well known brands that have had some missteps in the past year.

Delta Air Lines claimed the number one spot for the second year in a row but there’s good news. The company actually saw a 5 point increase in Favorability this year thanks to the efforts of CEO Richard Anderson. If they continue this way, the airline could be off the list in a year or two.

H&R Block and Big Lots came in 2nd and 3rd, Tenent doesn’t offer a reason why.

Papa John’s (4th place) Overall Reputation score has been rapidly falling for years. Tenent thinks it’s because of damaging statements the CEO made about cutting jobs and raising pizza prices in response to Obamacare. 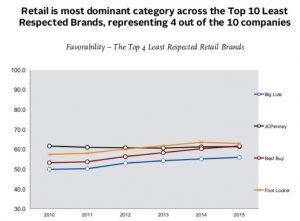 Foot Locker and CVS Health landed on the list because of a decline in profits. CVS stopped selling cigarettes scored points with consumers but the experts who responded to this survey didn’t like the impact on the company’s financials.

Best Buy came in 8th due mostly to bad reputation in regard to customer service. Watch social around the holidays and you’ll see numerous complaints about Best Buy’s promises, skimpy inventory and lack of service.

Tenet says the major difference between the brands on the Most Respected list and the Least Respected list is their ability to quickly pivot and recover from changes in business and in the world. This is why an old fashioned department store like JCPenney is on the bottom while fast moving Apple is climbing to the top.

These lists prove that you can make a marketing mistake, even report lower profits and still come out on top, as long as consumers and decision makers believe in and trust your company leaders. Protect the reputation of your executives and you protect the brand.