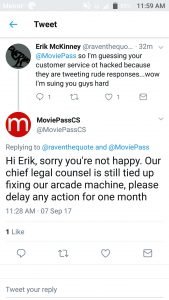 MoviePass generated an enormous amount of good buzz last month when they lowered the price on their “Unlimited” movie pass to only $9.95. For only $10 a month, the pass allows a person to see one movie every 24 hours, at almost any theater in the country. Crazy, right?

But this isn’t the plan of some overly ambitious, newbie start-up team. This comes from Mitch Lowe – the man who helped launch Netflix and Redbox. This is a man who has experience with entertainment disruption and low price subscription plans that result in large profits.

So what went wrong this time around?

In 2 days, the company saw more growth than they’d seen in their entire six years of business adding an estimated 150,000 new subscribers to the 20,000 they already had.

What happens when more than 100,000 people try to hit a website in the same 48 hour period? It crashes, over and over.

Reputation Strike 1: not anticipating and preparing for the heavier than normal usage. (We see this a lot on Black Friday)

Damage done: not too much. People were upset but most were willing to wait it out as the value was just too good to pass up.

Once people got into the site, they encountered a different problem. They couldn’t find out if their local theater accepted MoviePass before signing up. (This wasn’t actually true, but that’s how it appeared). This made people anxious and started a large flow of customer service emails that couldn’t be answered.

Reputation Strike 2: not making the process crystal clear on the site, including obvious lists of participating theaters on the web (not just on the app).

Reputation Plus Points 1: MoviePass posted a statement on their blog, explaining the situation and offering direct links to the FAQ.

Damage done: this one started to hurt. People began to feel like they were being scammed when MoviePass kept replying “don’t worry, 99% of theaters are covered”. Meanwhile the AMC movie chain was publicly promising to block anyone using the program.

Stage three was card delivery. I signed up on day one and expected my card in the projected 3-5 business days. I was excited and anxious to try this new toy but after waiting two weeks, I got an email saying that “due to the large volume” I wouldn’t get my pass until well into September.

Reputation Strike 3: not anticipating the load again, forcing people to wait nearly a month for delivery.

Reputation Plus Points 2: sending a letter to explain the delay and giving anticipated shipping dates.

Damage Done: even though the letter helped, it didn’t stop the constant barrage of people complaining about late delivery on Facebook, Twitter, the FAQ pages and all forms of MoviePass customer service. Complaints – but few actually threatening to cancel.

Now it’s mid-September and MoviePass – despite having 3 strikes against it – is starting to turn the tide. Cards have been delivered, people are going to the movies and the positive reviews are trickling in. “Trickling” being the important word here, because many people (including me) are still stuck in MoviePass madness.

In my case, my first attempt to use the card resulted in a decline by my theater because the system didn’t load enough money on the card to pay for the ticket ($3.50 credit toward a $12.00 ticket). I contacted customer service through the app chat while I was at the theater. I got a response an hour later in the form of another question, not a solution. I also tried Twitter customer service but no response at all. It was there that I encountered the 100s and 100s of people like me who were asking about declined cards, glitches in the app, how to get reimbursed for tickets (the robo answer tells you to pay full price and then send proof to Moviepass for a refund).

Reputation Strike 4: a system that can’t handle the load plus an overwhelmed customer service center equals. . .

Major Reputation Damage: at this point, people are planning to cancel – if they can figure out how. Journalists are writing full articles about MoviePass fail and some are speculating that this whole thing was a scam to bolster the company before sale or bankruptcy. They knew they couldn’t make a profit with this many customers, so they’re purposely driving people to cancel to get the right balance. I suppose it’s possible, but I doubt that’s the case.

The final blow comes in the form of a sarcastic tweet response that probably came from an overwrought, overworked customer service agent. There’s no excuse for this, but it’s understandable.

Final Tally:  For only $9.95 a month, Moviepass bought itself one heck of a lot of publicity both good and bad. At the moment, the bad side appears to be winning but if they can become better communicators while they fix the problems, that will go a long way toward shifting public opinion.

UPDATE: Looks like they heard us! MoviePass just posted another update saying they’ve increased manpower to take care of the backlog. That’s how you mend a broken rep!