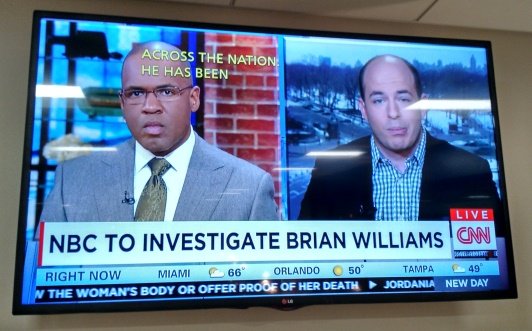 Most of us have been known to stretch the truth now and then. We embellish to impress, to keep up with those around us or simply to make a story more entertaining. No harm, no foul. Even if you get caught in the lie, it’s only embarrassing for a little while and then it’s back to business as usual — unless you’re a politician, a highly-visible CEO, or a news anchor.

It’s been a tough week for the news industry. A sports anchor was shot in San Diego; a beloved news veteran was killed in a car accident and then there’s Brian Williams. In comparison to the other two events, Williams’ “misrepresentation” is inconsequential but the media and the public aren’t about to let him off the hook just yet.

The trusted NBC news anchor has been telling the story about his close call with an RPG in Iraq for years. If you’re interested, CNN has gone so far as to detail each time the story was told in public with notes on how the story changed. Reading this, it seems like Williams might have been using the royal “we” when he told the story on the news, but whether or not he lied intentionally, at this point, isn’t the issue. The issue now is that he’s lost the trust of the nation and that’s not just a severe blow to his career, it’s a tough break for his employer, too.

Once the story broke, NBC was forced to make a decision to either stand behind their anchor and become a pariah along with him, or stand against him in hopes of salvaging their own reputation. They chose to suspend Williams for six months rather than fire him because of ” the good work Brian has done and the special relationship he has forged with our viewers over 22 years.  Millions of Americans have turned to him every day, and he has been an important and well-respected part of our organization.”

That decision could cost them viewers.

It was a tough call and not because what Williams did was so horrendous and inexcusable. It was a tough call because one person became greater than the team. Williams will be fine, but there are 100’s of NBC news employees who are going to have to work even harder to gain back the trust of the public. And in the news game, a drop in ratings means a drop in revenue and that’s bad news for everyone at NBC.

We’re all human and humans make mistakes, but when your star employee makes a public misstep there’s no stopping the ripples. Fair or not, key employees have to be held to a higher standard. The best way to avoid trouble is with proper training from human resources and / or legal council. In addition, speeches need to be vetted and employees must be cautioned to stick with the script.

It’s also a good idea to check the public bios of high-profile employees on a regular basis. These blurbs are routinely emailed, shared, copied and pasted and that can lead to typos and misinformation.

In these days, where anything we say can be instantly captured and shared on the internet, it’s even more important that our star players stick with the facts whether they make a good story or not.