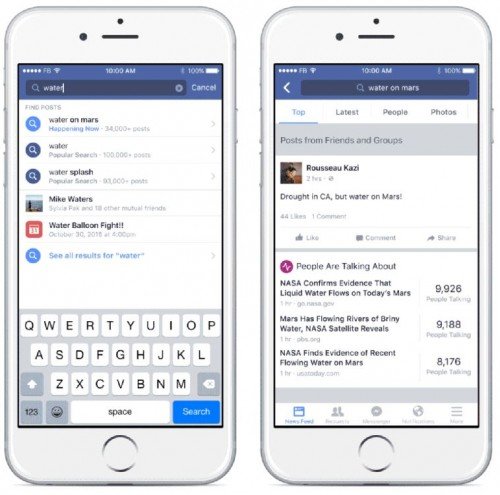 FYI – Facebook just rolled out an upgrade to their search engine that is going to make it very easy for anyone to find any post on Facebook regardless of your connection to the person who wrote it. They call it Search FYI but they should call it Search Deja Vu because I swear we’ve seen this place before.

Facebook users conduct over 1.5 billion searches per day hoping to find a nugget in the over 2 trillion posts in the system. Good luck with that. Up until now (and maybe still), Facebook’s search results have been more irrelevant than informative.

A few years ago, Facebook announced a major improvement including the ability to search using proper sentence structure. Is there a pizza place near my house? Which of my friends has seen the new Paranormal Activity movie? We all played with it the first week then abandoned the idea because the “plain language” wasn’t all that plain and it was hard to remember how to phrase things to get what you wanted. Even when you got it right, the results were less than stellar.

I understand that Facebook was developed as a tool for connected people to share personal information but we’ve grown beyond that and it’s time for the search engine to catch up.

Facebook says it’s a done deal. With Search FYI, they promise better search suggestions, relevant results from everyone — not just friends and family – and the ability to drill down into the conversation on trending topics.

I did a test by searching the name of a book I published a year ago. Facebook returned posts from me and my sister, but it also showed me a post from a total stranger. A total stranger promoted my book on Facebook. What a nice surprise. Thank you, stranger.

But that same search could have gone horribly wrong. I could have found posts that said my book was awful or that I was awful. How awful would that be? On the other hand, it’s better if you know what your reputation is so you can work on fixing it. And, if they’re out there saying good things about you, this is your chance to give thanks and offer free advice or a 10% discount on their next order.

If Facebook’s new search upgrade works as well as they promise it will, a lot of old information is going to rise to the top. If a new comment is added to an old thread, that thread will bubble up to the top. This is great news if you have nothing but happy clients and customers on Facebook but it can mean relieving old mistakes if you’d tripped up in the past.

It’s hard to say how the mere act of searching for a post will affect that post’s importance in the grand scheme. Still, I’d recommend taking the new search engine for a test drive using the name of your company, your name and the key players or products.

If you find uncomplimentary posts, don’t comment, just take note. If it’s recent, contact the poster through the private message system to see if you can make it right.

If you find a complimentary post, go ahead and say thanks even if it was posted a year ago. Better late than never and you might renew that person’s interest in your brand.

If your search turns up old posts you wrote that don’t show you in the best light, delete them. If you found them, other people will find them, too.

The most important lesson to take away from this is that Facebook is making it easier for anyone to find anything that’s ever been posted publicly. That’s not just posts from the past, but posts you’ll be making going forward, too. Remember that before you hit enter. What you write today might get buried under a 100 posts in a newsfeed but it’ll come right up to the top if a visitor types in the correct keyword six months from now.