Nikon takes a reputation hit for rewarding a fraudulent photographer

Nikon takes a reputation hit for rewarding a fraudulent photographer 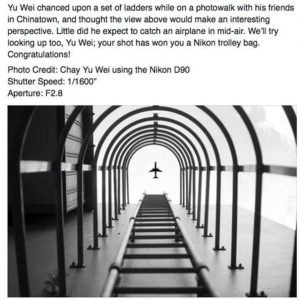 A Facebook photography contest run by Nikon Singapore turned into a reputation nightmare for two entities and a windfall of gleeful followers for a third.

It all began when a photographer named Chay Yu Wei submitted this amazing photo as an entry in Nikon Singapore’s loose, social media contest. Impressed, Nikon contacted the photographer to talk about how he happened to get such a fortuitous shot.

Right away, the experienced photographers who follow the Nikon Singapore Facebook page pointed out that not only was the photo a fake, it wasn’t even a good fake. (It looks fine to me, but I’m not a photographer or a Photoshopper!)

The photographer who submitted the photo remained quiet for a bit assuming, as he later explained, that Nikon would contact him with instructions on how to respond. That never happened, so he took matters into his own hands and posted his own explanation / apology on Instagram. In short, he created the photo with an inexpensive mobile app with intentions of posting it on his Instagram as a work of art. But then his better judgement caught a flight out of town (my words, not his) and he entered the photo in the contest.

“I crossed the line by submitting the photo for a competition. I meant it as a joke and I’m really sorry to Nikon for disrespecting the competition. It is a mistake and I shouldn’t have done that. I also shouldn’t have jokingly answered Nikon that I caught the plane in mid-air and should have just clarified that the plane was edited in using PicsArt. This is my fault and I sincerely apologise to Nikon, to all Nikon Photographers, and to the photography community as general.”

Nikon then chimed in with their own apology, saying that they should have been more diligent and will tighten up their image review policy in the future.

Even with the explanations and apologies, both Nikon and the photographer are taking hard reputation hits. I suspect what happened on Nikon’s end is that they have a social media manager who knows more about social than photography which is not uncommon. He (or she) chose the photo for its impact alone. That would have been okay if it was a contest for a fashion brand or even a travel app. But Nikon is a photography brand which means they have to be held to a higher standard. It’s like a designer label rewarding a fan for creating knockoffs. Nikon not only looks foolish, they look like they don’t know anything about their own products.

Chay Yu Wei is also taking a lot of social media flack over his actions. At this point, his Instagram (with plenty of truly enjoyable photos) is still active but he hasn’t posted anything since the apology a week ago. I wouldn’t be surprised if he disappears off the grid rather than face the bashing and bullying, especially since an nearly identical photo has surfaced. Now Yu Wei isn’t just being called a liar and a cheat, he’s being accused of copying another artist’s work.

But that’s not the end of the story. There’s one more reputational wrinkle in this photo fake tale.

Canon Canada is now running their own mock photo contest in response to the Nikon mess. Only in Canon’s contest, edited photos are not only allowed, they’re encouraged. The post has more than one thousand comments and quite a few submissions parodying not only the original photo but the description of how it happened.

Is Canon hurting their own image with this pointed jab at the competition? Or does the fact that it’s funny make it alright? And what about the original photographer? Some would say that this Canon contest is a form of online bullying. If this was a group of kids ridiculing a classmate on Facebook it wouldn’t be tolerated, but it’s okay if it’s a joke among the grownups?

As far as I can see, Canon is doing exactly what Chay Yu Wei did. They’re letting their desire for exposure override their better judgement.

What say you? How many reputations are on the line here? One, two or three?