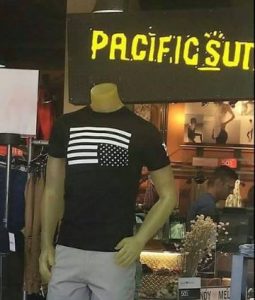 PacSun, the trendy California lifestyle clothier, might have gotten away with their new upside-down flag shirt if it wasn’t in store windows on Memorial Day weekend.

Angry shoppers lit up the company’s Facebook page as well as their online store with expressions of outrage and disgust.

One poster summed it up with this,

“The first amendment may cover you, but I pray that the law of economics bus runs you over. Until you’ve removed that shirt and apologized to our nations Veterans, I’m not only boycotting your store, but encouraging others to do the same. Fashion is one thing, but stomping on our flag is another and yes many Vets will consider this stomping on the flag. Unless of course you’re going out of business and this is your way of surrendering…Good luck with this promotion, I hope you eventually remember where your right to be this dumb came from…

I’m not sure the First Amendment covers T-shirt designs but there may be a larger issue. The US Flag Code says flags will never be displayed upside-down unless it is to signal dire distress. It also says that a flag will not worn as apparel.

One could say that the upside down flag on the shirt is an expression of the designer’s feeling that the world is in dire distress. This goes along with the anarchy symbol on the arm of the shirt.

As for “not worn as apparel” – well, a T-shirt with a flag design is not the same as an actual flag made into a T-shirt. This one isn’t even red, white and blue so it’s more of a US flag-like design.

Not that any of this matters because once the public is this upset and the press picks up the story, there’s only one thing to do. Remove the shirt. PacSun did and they issued this statement.

As a retailer grounded in youth culture, PacSun values artistic and creative expression through the brands that we sell in our stores. Out of respect for those who have put their lives on the line for our country, we have decided to stop selling the licensed flag t-shirt and are removing it from our stores and website immediately. We thank the men and women in uniform for their extraordinary service.

A little horse / barn door but what else could they do? Take a stand and keep selling the shirt, maybe? That would mean taking some heat but would it actually hurt their bottom line? Probably not. This isn’t mommy bloggers boycotting Pampers. Most of the people who complained aren’t PacSun’s target audience; a quick look at their Facebook profiles will tell you that.

One loud complainer recently posted about his love of Sons of Anarchy. How ironic. Another angry “customer” has nothing but images of guns and foul language on his Facebook page. This outrage might have started over patriotism but it’s spiraled into yet another social media dog pile.

Here’s a fact no one is discussing. The shirt is from a collection by Rapper A$AP Rocky. A few years ago, Rocky was arrested for beating up two photographers and a store clerk in a clothing store all of whom caught him doing drugs in the shop. Responding to a lawsuit filed by the clerk, the rapper said, “he started it.”

So PacSun makes a deal with a volatile celebrity then folds instantly when the public cries foul over a shirt. Sounds like the department heads in this company aren’t all on the same page.

What do you think? Is PacSun really saving their reputation by removing the offending shirt from stores? Or is it too little, too late?