The value of a winning reputation? About $14 billion

The value of a winning reputation? About $14 billion 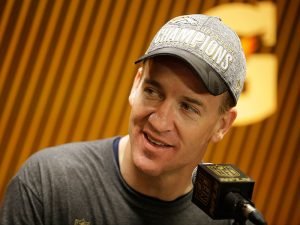 When asked if he was going to retire after Super Bowl 50, Peyton Manning didn’t know for sure.  What he did confirm, however, was that he would be enjoying “a lot of Budweiser” after the game.

That, and one other quick mention of the St. Louis brewing company’s goods are estimated to be worth $13.9 billion in advertising dollars.  If Manning had been paid to make the statements.  Turns out, the quarterback for the Denver Broncos just really wanted an ice cold beer after a really big game.  His comment may not have been completely without reward, however, as it is rumored that Manning owns a stake in one of the beer giant’s distributors in his home state of Louisiana.

Initially, the mentions were valued at$3.2 million, but because conversations about the brand-dropping continued to pick up steam on social media overnight, the value estimates skyrocketed by Monday morning.

Unfortunately, we don’t have the captive audience that the Super Bowl commands, so how does one gain the kind of momentum that an almost $14 billion mention gains?  It definitely helps to have someone with a good-guy-football-legend reputation like Peyton Manning pulling for your brand.  If you don’t have a pro athlete in your pocket, however, there are still some things you can do to increase positive mentions for your brand.

For example, Mr. Manning will be receiving a gift package with a variety of craft beers to sample.  Small specialty brewers may not be able to compete with Super Bowl sized advertising budgets that beer giant Budweiser has, but they’re confident that they can win over the hearts, and hopefully, a few mentions, from the Denver Broncos.  After the 2014 AFC Championship, Manning dropped a Bud Light mention, and Longmont, Colorado’s Left Hand Brewing sent the team three cases of their beer with a note: “We think it’s a better call.”

Even if you don’t have beer to send, providing great service will help you gain ground with your customers, and their supporters.  Ensuring a positive experience will keep customers loyal and help you gain new ones.  You never know when one of those customers will have the podium at a world-famous sporting event.