REI bolsters its reputation by putting people before profits

REI bolsters its reputation by putting people before profits 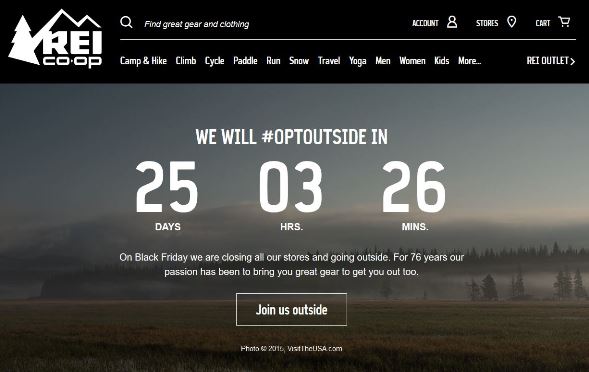 In the movie Miracle on 34th Street, Macy’s’ Santa Claus sends a customer to a different store in order to get the very best ice skates for her child. The parent, so impressed with the idea that Macy’s would put the spirit of the season ahead of profits, vows to become a regular Macy’s shopper. From there, the concept blossoms into a huge marketing campaign with every Macy’s employee dedicated to helping the customer find exactly what she wants, even if it means sending them to long-time rival Gimbels.

The campaign creates a buzz, the store’s reputation skyrockets and Macy’s makes more money than ever before all because they put people in front of profits.

Miracle may be just a movie, but the principle behind the idea is quite sound. Customers prefer to shop at companies with a conscience. And the press loves to write about them (see what I’m doing right now) because it’s so rare — which is kind of sad.

This year’s “miracle” is REI, one of the largest retailers of camping, fishing and outdoor gear. Instead of huge markdowns and doorbuster deals, REI is going to pass on Black Friday. They’re going to lock the doors on all 143 stores and give all of their employees a paid holiday which they hope they’ll use to spend more time outside.

Why are they doing this? REI President Jerry Stritzke says it’s about a set of values. In an email to customers, he quotes John Muir.  “Thousands of tired, nerve-shaken, over-civilized people are beginning to find out that going to the mountains is going home.” Tired? Never-shaken? That’s Black Friday alright. But given that Black Friday falls the day after Thanksgiving, it’s more likely that employees and customers will use that day to travel or shop the retailers who are going to be opening at 5 am.

Will REI lose money? November year-over-year, possibly but what they’ll gain in goodwill could bolster their holiday 2015 numbers way beyond what they took in last year. REI also has a very large online presence, so it’s not like they won’t be taking in anything on Black Friday. (Unless they also close their website which would be a monumental first in the history of online shopping.)

Normally, I’m cynical enough to believe that a statement like this is nothing more than a Miracle on 34th Street style marketing ploy. REI can’t compete with the big box stores on Black Friday so they make a grand gesture that they know will generate buzz and free publicity.

Nordstroms did it last year when they bucked the new trend of opening on Thanksgiving Day. Hobby Lobby and Chick-fi-A have been doing it since day one by keeping their locations closed on Sundays. Now here’s REI not only fighting against the bad-will toward men that is so often a part of Black Friday, but they’re attempting to start a new holiday tradition. More power to them, I say.

I spent a dozen years of my life working retail over the holidays. It’s a miserable experience that always leaves you explaining to family members why you can’t fly home for Thanksgiving or why you have to leave the party earlier. (Store opens at 5 am!) It’s no fun and it’s certainly not in the spirit of the season.

There’s another reason I’m siding with REI on this one. Ten years ago, Black Friday was the day to get the best prices on gifts for the holidays. In 2015, it’s less of a draw. Customers know that they can get great deals online and that there will be more markdowns from now until Christmas.

If you’re still deciding whether or not to play the game, think about this: would you rather have more customers one day a year or a better reputation for the next 365?

If you’d like to spend your Black Friday outdoors, REI has set up a special webpage which will help you find a hiking trail, park or other wooded area where you can spend the day. Visit: http://optoutside.rei.com/ for details.