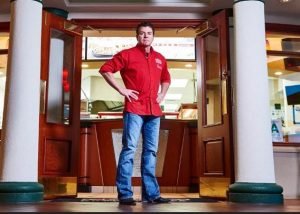 Papa John resigns, but the name remains the same

Pizza maven “Papa” John Schnatter was in the hot seat again this month, when he was caught using racial slurs on a conference call (bad choice). He resigned (good choice), then backpedaled days later saying his decision to leave the company was a mistake (bad choice). He claims the whole “n-word” blowup was a case of being quoted out of context and by resigning he’s allowing his name and the company name to be unfairly tainted.

Sorry, no. Yesterday, Forbes published an in-depth article chronicling years of bad behavior on company time including spying on employees, sexually inappropriate comments and plenty of legal settlements and non-disclosure docs to keep it all under wraps.

While Papa John haughtily denies it all in public, the company has to start thinking about a massive change. Given enough time, most companies can erase the memory of a bad CEO but how do you change the public’s perception when the offender’s name is on every door.

If things get worse, the company may have no choice but to rebrand; a dangerous and expensive proposition. At the very least, the company needs to remove Schnatter’s face from all company advertising. Maybe if they replace him with a cartoon version, people will eventually forget that Papa John was a real and flawed person, after all.

Elon Musk needs to stop tweeting – or not

Somehow, billionaire inventor Elon Musk managed to turn a heart-wrenching rescue effort into a social media slapfest. Musk hastily built and delivered a mini-sub which he hoped could be used to rescue the young soccer team that was trapped in a flooded cave. One of the rescue divers called it a PR stunt and Musk fired back on Twitter calling the diver “pedo guy” and more. The Tweets were deleted and apologies were offered but speculators think Musk might be cracking under the pressure. He went from Tweeting 100 times a month, to 400 times a month often attacking others in the defense of himself and his company.

Initially, Tesla stock dropped but has since bounced back. Musk’s loyal fans are also standing by his side. It appears that people are willing to write his angry Tweets off as the byproduct of his passion for making the world a better place.

The takeaway here: you might get away with it as long as your heart is in the right place.

MGM Resorts, owner of the Mandalay Bay hotel shocked the world this week when they filed lawsuits against more than 1,000 victims of last years mass shooting in Las Vegas. The move was designed to shield the hotel from liability by putting an Anti-Terrorism law into play.

It’s all very legal and technical and after reading it over three times, I’m not sure even I understand why they had to countersue. What I do understand is that it sounds deplorable when you see it in the news. That’s not going to help the hotel’s already injured reputation. I’d guess that MGM is worried that fighting 1,000’s of individual lawsuits would drive the hotel to bankruptcy. But it seems to me, suing the victims of this terrible tragedy, is just a faster road to the same dead end.