Are restaurant owners right to say they can’t control actions of employees?

Are restaurant owners right to say they can’t control actions of employees? 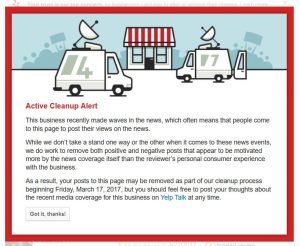 When a waiter in a high-end, Southern California restaurant asked for proof of residency, Diana Carrillo handed over her ID without even thinking. A moment later, the true meaning of the request sank in. The American born daughter of Mexican immigrants was being asked to prove that she was living in the US legally!

Understandably upset, Ms Carrillo complained to the management, left the restaurant, then posted about the incident on Facebook. You can guess what happened next; the story went viral. Within a few days, the name of the “offending” restaurant was splashed all over newspapers and websites from the LA Times to the Washington Post. A tale about immigration and discrimination – it was so of the moment, there wasn’t an outlet who could resist repeating the story.

Including our outlet, obviously, but we’re interested in another side of the story. Once the incident hit the wires, the restaurant started taking the hits on Yelp. Predictably, people who had never visited the establishment began posting angry, one-star reviews. People who claimed to have visited, felt the sudden urge to complain about the service, attitude and prices.

The overall consensus: the restaurant should be shut down because one waiter decided to express his political views (or perhaps he thought he was being funny, no one is sure). Is that the way it should be? We all try to hire the best people. We train them and lay down rules with consequences, but when an employee is out to get himself fired, what more can the management do? Should everyone else at the restaurant be punished because one member of the staff crossed the line?

The senior director of operations at the restaurant told The Washington Post;

“[Employee’s actions] are something that you can’t control. The true measure is how you then handle it as a company. I feel very proud of our team and how we tried to take a proactive approach, trying to create a positive out of this situation.”

When they were alerted to the situation, the management of the restaurant offered Ms. Carrillo and her party a VIP meal as an apology. Probably not the best option given her current feelings about the place. When she refused, they offered to make a donation to a charity of her choice. They also fired the waiter. And still people are angry.

At this point, the restaurant has done all they can do to protect their reputation. People want them to give up the name of the waiter, but that’s a bad idea that could lead to a lawsuit. As hard as it is, the restaurant needs to stop giving interviews and get back to business as usual. Any additional attempts to publicly correct the problem will only lead to another round of sniping. It may not seem like it now, but this will pass and the restaurant should emerge unscathed.

Though it’s true that we can’t control the actions of our employees, we need to do all we can to make sure they share our values. Don’t assume that your employees know what’s appropriate and what isn’t. Make it clear that you have a zero tolerance policy for any type of racial or gender comments even if a person is “just joking”.

It’s not an easy conversation to have, but it’s one you must have if you don’t want to see that Yelp cleanup message on your page.

Andy’s Take: While you cannot control your employees minute by minute, you can control who you hire, how you train them, and how you expect them to interact with customers. There was probably a LOT more that could have been done before Ms. Carrillo left the restaurant.