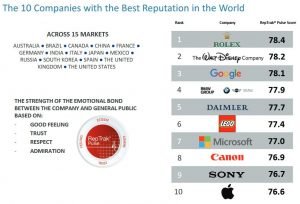 What do luxury watches have in common with colorful building bricks?

Rolex and LEGO are two of the ten companies that scored exceptionally high in the recent Global RepTrak reputation survey.

Rolex actually landed at the top of the top ten list, after hanging in fourth place for the past two years. Consumers in 11 countries put the watch manufacturer above Sony, Google and the Walt Disney Company! Yes, more people trust Rolex than Mickey Mouse and trust translates into dollars.

The Reputation Institute says that for every 5-point increase in reputation, a consumer’s willingness to recommend a company or product goes up by 8.5%.

That’s great news for top ten car manufacturers BMW and Daimler but bad news for former industry leader Volkswagen. After their recent emissions scandal, the company dropped from 14th  to 123rd on the list.

What’s interesting to note is that all of the top ten companies excelled in different areas. Apple was tops in innovation and leadership. Disney was honored for its social responsibility. Google was the leader in the areas of performance and workplace.

However, a strong score in only one or two of the 7 areas measured wasn’t enough to catapult any company to global greatness. The top companies all scored 70 or above (a “strong” score) in all 7 areas: products and services, innovation, workplace, governance, citizenship, leadership and performance.

As good as they were, not one company made the top ten list across all 15 global markets. And only 6 out of the 10 captured the majority of the major markets.

When you look just at North America, the chocolate lovers carried Hershey to the number one spot, knocking Rolex down to 8th place. Campbell Soup, Amazon, Nintendo and Johnson & Johnson also make the top ten.

In Latin America, it’s Nestle not Hershey, and Nike knocks out LEGO.

As for the Walt Disney Company, the man and the mouse appear on all of the major top ten lists, except North America. What’s that all about?

For the companies that didn’t make the grade, it wasn’t their bad reputation, but their lack of reputation that did them in. 41% to 58% of consumers said they were neutral or “not sure” when asked about a company’s performance in each of the 7 areas.

The Reputation Institute says that all companies would benefit from telling their story. If your company supports a charity, let the world know. Are your employees exceptionally happy and innovative? Shout it from roof tops.

Having an excellent product or service is essential, but today’s consumers want to support companies that are doing positive things for their employees, the environment, their city and  the future of the world. That’s not too much to ask now, is it?