Should Warner Bros. postpone San Andreas movie in light of the Nepal tragedy?

Should Warner Bros. postpone San Andreas movie in light of the Nepal tragedy? 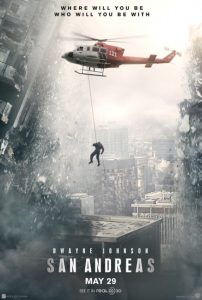 If you were watching TV during prime time last week, you might have seen the aftermath of a devastating earthquake. But that wasn’t news footage of Nepal, that was a commercial for a movie called San Andreas.

The title is a reference to the infamous fault line that runs through California that is predicted to one day split the state in two. It’s your typical disaster film with spectacular action, lives hanging in the balance, and a race to save loved ones from all kinds of dangers.

Unfortunately for Warner Brothers, the film is scheduled to hit theaters on May 29. That means advertising for the movie is running up against the real life and death struggle in Nepal. I love a good disaster movie but even I was surprised when I saw the fictional devastation on TV shortly after I saw the real thing on the news.

When asked if they were going to postpone the release, Warner Brothers said no. Variety is reporting that the studio will add information on how to help the victims in Nepal to their promotional packages. They were already planning to run PSAs about how to prepare for a disaster, so it’s not a big stretch.

Now, one of two things could happen when the movie hits theaters. The film could tank because movie goers don’t want to be reminded of the disaster. It could be a PR nightmare if it’s seen as disrespectful, but it could actually do better since earthquakes are on everyone’s minds right now.

Universal Studios has a similar but less urgent problem because they have a film about a disastrous climb on Mount Everest on their schedule. The film is based on a true story which might help their cause. And the movie isn’t due to hit theaters until September so it’s unlikely they’ll see any backlash because of recent events but you never know.

This isn’t the first time movies and TV shows have come up against a nationwide or global crisis. Buffy the Vampire Slayer was due to air an episode about a school shooting just a week after Columbine. The episode was pulled from the run and wasn’t aired until the season was repeated months later.

Australian filmmakers last month postponed production of an airline disaster movie that was eerily similar to the Malaysian Airlines flight MH370 crash. Wikipedia actually has an entire page dedicated to the movies and TV shows that had to be changed due to the events on 9/11.

So what is a studio to do? Shelving, even postponing a project is expensive but facing the wrath of the public can be even more expensive if it leads to a boycott or an ugly social media war.

Warner Brothers took a little flack last week for their poor timing and the networks who ran the ads were called insensitive on Twitter. I agree that it was a bad idea to let the ads roll, but I’m not sure if there’s a reason to postpone the film.

This entire discussion reminds of what happened when Saturday Night Live finally went back on the air after 9/11. Mayor Giulani appeared on stage surrounded by NYC policemen and firemen. He said, “Our hearts are broken, but they are beating, and they are beating stronger than ever.”

Then, SNL exec Lorne Michaels asked, in all seriousness, “Can we be funny?” Giuliani replied,”Why start now?” And with that exchange, we all understood that it was okay to move on. It was exactly the right statement at the right time.

How soon is too soon? That’s something every marketer needs to think about before promoting a product that even remotely relates to any natural disaster or highly visible crisis. In a perfect world, we’d shy away from offending even one person, but in the real world there are financial and contractual obligations that we can’t escape.

What do you think? Should Warner Brothers bump the release of San Andreas a few months or is a few weeks plenty of time to move on?