The shortest distance between an unhappy airline passenger and the airline is social media.

You’ve got a problem and you’re stuck on a plane or in an airport terminal. Your cell phone battery is dying and the WiFi is lousy. Instead of wasting time trying to find a customer service phone number online (forget email – that just results in an auto ‘we’ll get to you as soon as we can’ response), you open Twitter and begin to type. Within seconds, you have the airline’s Twitter handle and a few seconds after that, your complaint has been logged.

Social media is the simplest, and fastest, way to get the attention of a customer service attendant and as a bonus, it’s the easiest way to publicly shame a company into taking action.

Airlines don’t like it because it’s hard to solve a problem in short bursts with an unidentified, angry consumer, but 43% of airlines say they’re making customer service via social media a priority in 2018.

Surprisingly, Twitter says there’s an upside to public customer complaints. They say that a “resolved negative tweet leads to 3x more revenue potential than a positive tweet.” Maybe so, but it still hurts. Especially if you don’t answer right away. 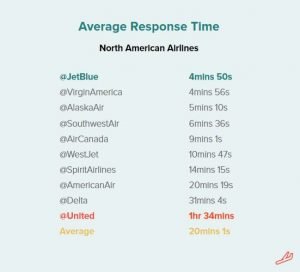 According to a recent study by Conversocial, every major US airline – except one – has their Twitter response time down to under an hour. The problem child? United, who came in at an average of 1 min and 34 minutes. Makes me wonder if it’s a question of too few customer service reps or too many complaints?

The big winners are JetBlue and Virgin who both came in under the 5 minute mark.

“As the importance of serving social passengers in a timely fashion becomes increasingly more pertinent for winning over brand advocates, being able to connect the dots and proactively engaging with your passengers will ensure a customer care team is equipped to successfully manage an issue.”

In other words, a quick response time won’t help your brand’s reputation if your people don’t have the tools and the power to actually solve problems as they arise. Simply replying, “I hear you” isn’t enough. Travel is stressful, so anything that upsets the tray-table can get magnified 100%.

Think you’ve got Twitter handled? Great, Conversocial says customers are moving on to direct messaging through Facebook and other messenger services.

Over a period of six months, Facebook Messenger contacts for Conversocial’s airline partners more than doubled. They also noted a 50% increase in Twitter Direct Messages. 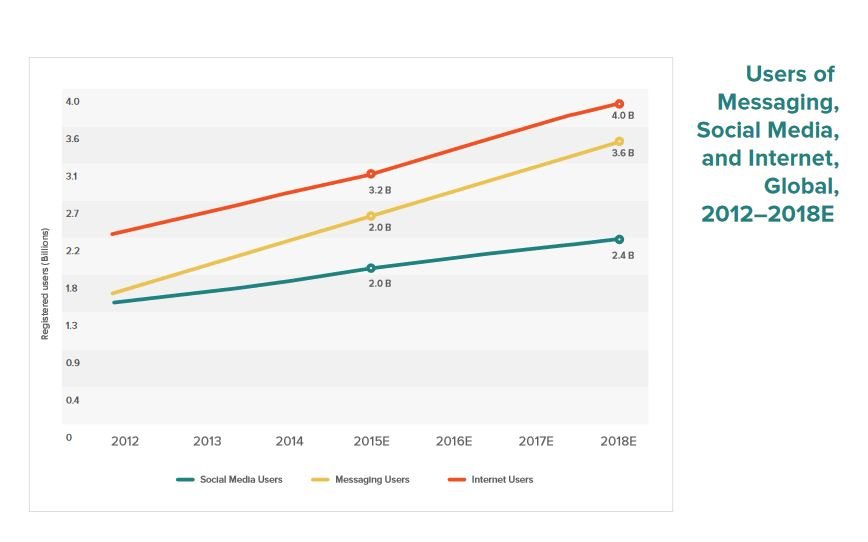 The good news here is that direct messaging is private (no more public shaming) and it’s easier to keep track of a conversation on messenger than in a series of Tweets. Messenger apps also allow customer service reps to safely gather needed personal information and follow up later to make sure the customer was completely satisfied.

The downside is that this is yet another channel to monitor. Try telling a customer you missed their Facebook message because your team was over on Twitter and see how well that goes over.

Chances are, those of you reading this, aren’t running an airline. But you are running some kind of business and businesses need happy customers. If you’re small, monitoring a dozen social channels for customer service complaints is tough but there are tools that can help with that. It’s nice to think that customers hold airlines to a higher standard, but it’s simply not true. No one wants to wait more than an hour for a response to a problem. Doesn’t matter if it’s about a $1,000 airline ticket or a $3 box of crackers.

In order to protect your brand’s reputation, make a regular sweep of all your social media channels including comments and private messages. Respond to every issue as soon as you find it, even if you have to do more research to solve the problem. And when possible, please don’t respond to a complaint by asking the customer to email customer service. That’s easier for you, but it’s another roadblock for them and you don’t want to go there.

Above all, be honest about what you can and can’t do. Yes, faster is better, but if it’s going to take three days to fix the problem, say so and be sure to follow up on that third day. As long as the customer feels that you’re actively trying to make things better, they’ll hang on. The longer the process takes, the more you should consider sweetening the deal with a discount, refund or gift.

Some final words of wisdom from Conversocial:

“Armed with their smartphones, social channels ablaze, the empowered customer has a louder voice than ever before. Airlines must create meaningful and effective relationships with their customers by listening, engaging and resolving at the desired customer touch points.”