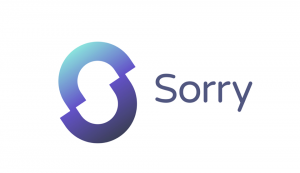 Between CEO’s confessing to corporate misdoings, and celebrities regretting their latest offensive tweet, the public apology has become as commonplace as the crazy cat video. But how does an apologizer know if they’ve been forgiven for their transgressions? By checking the “Sorry” app, of course!

Former news anchor, Greta Van Susteren cryptically teased the release of her new app on Facebook. Was she serious? Is this a real thing? Do we actually need an app for public apologies? I can’t answer the first two questions, but I can answer the third. Sorry sounds like exactly what we need to kick off the new year.

If you’ve wronged your spouse, you can us the app to privately say you’re so, so very sorry. If and when the offended party accepts, via the “accept” button on the app, then you’ll know it’s safe to come home. Apology rejected? Better make other plans. Maybe the app can have an upgrade option that gives you good long-term rates at a local hotel.

The public side of the app is where its at. Every day, the app users can skim through a list of current public apologies accepting and rejecting along the way.

Movie star apologies for his insensitive remarks on the red carpet: apology rejected!
With great celebrity comes great responsibility, so you’re not getting off that easily.

CEO says he’s sorry your date is now in the hands of a hacker: apology accepted
Data breaches are so common these days, there’s really no profit in holding a grudge.

And speaking of data, Van Susteren could make a mint selling off the app data if this thing blows up.

What would a PR firm pay to the demographics on who accepted their client’s apology and who didn’t? It would be much easier to draft a follow-up statement if you new it was 80% young, educated women who gave the thumbs down, wouldn’t it?

If we were talking about this 5 years ago, it would sound like a silly, flash-in-the-pan idea, but the world has changed in so many ways. Take the recent round of accusations in Hollywood. In the past, a studio would have rallied behind their stars. A donation to charity, a few pictures with a group of needy kids and you’re back in the public’s good graces.

We’re not falling for that anymore. Now, instead of rallying, companies are doing all they can to distance themselves from the offenders and it’s costing billions. Reparations, shutdowns,  canceled contracts, finding last minute replacements, wiping all evidence of a connection off of advertising, even past projects. I’m not minimizing the social and emotional impact of this year’s biggest offenders, but the financial impact is putting good companies and good people out of business.

Greta Van Susteren’s ‘Sorry’ app is a sign of the times. Sure, plenty of people will see it as a fun, little game for the celebrity obsessed. Others will view it as a way to make their voice heard. But for you, the business owner, CEO or celebrity, having the app on your phone will be a daily reminder to live your life in a way that leave you never having to say you’re sorry.

Andy’s take: If you make a mistake, consider this app as just one more new channel to share your regret and apology. Don’t make the mistake in thinking this app can replace the need for you to make a heartfelt, personal apology to those you’ve offended.