For 40% of consumers, 3 reviews is all they need to form an opinion

For 40% of consumers, 3 reviews is all they need to form an opinion For 40% of consumers, 3 reviews is all they need to form an opinion about a local business. That’s three at the max. That’s good news if your Yelp page is full of glowing testimonials but it only takes one or two angry customers to prevent the next person from dialing your number or stopping by your place of business.

The 2015 Local Consumer Review Survey from BrightLocal shows that consumers are becoming more savvy about the online review space. 33% said they regularly read online reviews and 59% said occasionally bringing the total number up to 92%. Back in 2011, that number was 71% — high but there was some wiggle room. With today’s 92% there isn’t even room for a small shimmy.

There is some good news. 69% of those surveyed said that only reviews written within the past 3 months are relevant. That means that you have a good chance of recovery if you went through a bad patch earlier in the year. But the opposite is also true. 10 years of excellent service won’t mean much if the last three people to comment leave complaints.

There’s a third way to look at this stat that isn’t covered very often – no recent reviews at all. If the majority of consumers only trust recent reviews, how do they view a company who hasn’t had a single review in the past 6 months? The optimist would say the company is doing a good job so no one has felt the need to complain. That’s good. But the pessimist in me says the company also isn’t doing enough so no one is leaving praise, either. 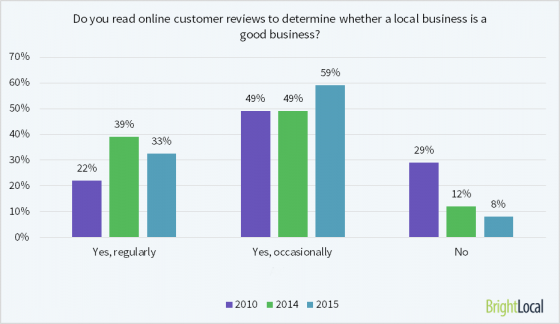 Positive comments are much tougher to get than negative ones. It’s not that people are harder to please, it’s just that we rarely bother commenting when service is good or as expected. It’s not until a company goes above and beyond that we take the time to post our opinion. This is why it’s important to encourage customers to leave reviews. Some use the allure of a sweepstakes, others simply ask politely or print the request on the bottom of the receipt.

There are two other interesting facts in this BrightLocal report. The first concerns star ratings. Slightly more than half of those surveyed said they would consider a business with a 3-star rating. That might not sound so bad but think about it. What does 3 stars mean to you? If that was a grade would it be a B or a C? If it’s a 4-star rating system, that’s one below excellent and that’s pretty good. But almost half of all consumers said 3 was too low. Drop below that and only 13% said they’d risk it.

These stats drive home what a numbers game this is. If you only have 3 reviews and one is low, you’re in trouble. If you have 100 reviews those low ratings are more likely to get wiped out in the final average. So again I say, you have to do all you can to get customers to review regularly.

The final stat is this: 80% of consumers said they trust online reviews as much as a personal recommendation. That’s quite a statement but it comes with an “if”. 31% of those people said they trust reviews that they believe to be authentic. Meaning they don’t judge all reviews equally. BrightLocal says the number of cautious review readers is on the rise. It could be that we’ve seen too many news stories about fake reviews and it could be that more consumers understand the value and power of online reviews.

That’s good and bad news for any business. On the downside, it means unhappy customers know they can strike a deadly blow with a properly placed and strongly worded negative review. On the upside, this knowledge might encourage your loyal customers to go public with their praise.

“Fast service. Better than expected. I’ll be back.”

A public reward for a job well done.

3 Comments for “For 40% of consumers, 3 reviews is all they need to form an opinion”