Is there such a thing as being too popular? Sunny Co says, oh yes!

Is there such a thing as being too popular? Sunny Co says, oh yes! The Sunny Boys of the Sunny Co came up with a super idea to promote their new line of swimsuits. They asked their Instagram followers to repost a specific photo of a model wearing their red Pamela suit. Everyone who reposted and tagged the company within 24 hours would get the $65 swimsuit “free” – as long as they agreed to pay the shipping and handling.

The Pamela suit appears to be named for, and inspired by, the red swimsuit Pamela Anderson wore in Baywatch. The new Baywatch movie premieres this month, so it was indeed, a great time to run a viral promotion.

20 hours after the start of the giveaway, they changed the rules to say “due to the viral volume of participants (huh?), we reserve the right to cap the promotion if deemed necessary.” They also noted that, due to the large number of orders, shipping would take at least 3 to 6 weeks. Though now, it seems that some will be lucky to have their suit delivered in time for Halloween.

I imagine there are legal rules regarding the changing of a contest after it’s begun but that wasn’t what knocked the wind out of their sails. A large number of people were charged the full $77 for the suit, even though they used the promo code and received what appeared to be a confirmation.

What started out as a fun game, turned into an angry mob gathering at the founder’s Facebook doorstep. People complained about getting hit for overage fees due to the larger than expected charge. Others simply wanted to know that the company was going to fix the problem, but the company was busy shipping bathing suits, so they didn’t have time to reply. 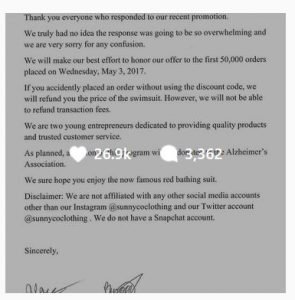 Two days have passed and every suit on the company’s website is now sold out. Yeah! Except they’re giving away most of them for $12. Yikes! How many? The latest Instagram post is a letter from the Sunny Boys saying that they’ll attempt to fulfill the first 50,000 orders that hit their server. 50,000! They also promised to correct all of charges but said they couldn’t make good on any bank fees.

“We are two young entrepreneurs dedicated to providing quality products and trusted customer service. As planned, a portion of this program will be donated to the Alzheimer’s Association.”

Noble words, but you can’t donate a percentage of a loss and as for trusted customer service. . . well, that remains to be seen. If they’re going to save their reputations, they’ll have to bring on some extra help (more money lost) and clean up all of bad transactions within a few days. Then they have to start shipping and hopefully they have enough stock to cover the promised sales. Customers will give them a few months, but once summer hits, they’re going to want those suits!

Before signing off, the boys note that they only have two official social media accounts; one on Instagram and one on Twitter. This is to separate themselves from the attention seeking trolls who have started phony accounts on Snapchat and Twitter. Good move there.

Given the larger issues of the world, anyone who gets a refund instead of a $12 Sunny Co bathing suit should laugh it off and move on. Yes, it’s disappointing but it’s clear that the company didn’t make this offer with the intention of defrauding people. It was an honest mistake. But people, being people, will likely ride this company hard until every beach in the US is nothing but a sea of red.

Once they get past the current crisis, this could work out in their favor. Now, when someone sees a Pamela red bathing suit on the beach, they’ll immediately think of the Sunny Co. And isn’t that what advertising is all about?

Andy’s take: Don’t rush to launch any social media promotion. Forgetting to add a limit to the contest almost sunk Sunny Co. They made an honest mistake and tried to do the right thing, but it’s always cheaper to remember the saying: measure twice, cut once.

Share the post "Is there such a thing as being too popular? Sunny Co says, oh yes!"