Does product price matter when it comes to reputation recovery? Survey says…

Does product price matter when it comes to reputation recovery? Survey says… 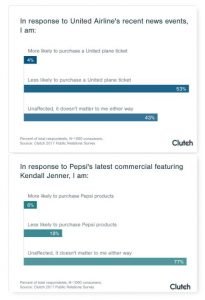 From mishandling of a customer, to a joke that offends; our social media channels are overflowing with #PRFails that have gone viral.  After that comes the angry retorts and the quick click sharing so others can share in the outrage, too.

These public fails are tough on a company’s reputation but they can be even tougher on the bottom line–with “can” being the operative word in the sentence. According to a new survey from Clutch, the financial impact of a PR mishap is directly related to the size of the purchase. In other words, consumers are more likely to take their business elsewhere if a large chunk of money is involved.

In their recent report, Clutch detailed the consumer response to three companies with bad press; United Airlines, Pepsi and Chick-Fil-A.

United was dealing with the incident where the passenger was injured while being dragged off a plane. 53% of those surveyed, said that, after hearing about what happened, they were less likely to buy a ticket from United.

Next up was Pepsi; in hot water for a controversial commercial that suggested a cold drink could calm officers in riot gear during a protest. In this case, a whopping 77% of respondents said the backlash wouldn’t stop them from buying a Pepsi if they were so inclined.

As for Chick-Fil-A, participants were asked if they were less likely to eat at the fast food restaurant after hearing about the company’s fight over their religious values. 58% said the news didn’t affect them either way and 25% said they were more likely to stop by for a bite.

Clutch says these results point to a shift in behavior based on the value of the purchase. That negative PR is more likely to scare off a $100 customer than a $10 customer. It’s a valid point but it may have more to do with circumstances than actual dollar amounts. Pressing the Pepsi button on the soda machine doesn’t have the same ramifications as putting yourself in the hands of an airline for half a day or more.

We also have to look at the events that got each company in trouble. Chick-Fil-A felt the heat because they brought religion into the workplace. There are plenty of people who agree with them or at least respect them for standing up for what they believe in. The company didn’t “make a mistake” or backpedal after making the news. They said, ‘we are who we are’ and we hope that won’t stop you from enjoying our restaurants.

That’s very different from the Pepsi ad team who stepped too far out on a limb. They wanted controversy – obviously – but they didn’t expect it to hurt the company’s reputation. In the end, though, all they did was make an insensitive advertisement and though it may have been painful to watch, no one really got hurt.

But then there’s United Airlines, whose employees not only made a series of bad choices, they actually caused bodily harm to one customer and emotional harm to many others. After the incident, future flyers were left to wonder if it might happen again, or worse! Of course they were reluctant to buy a ticket! Who wouldn’t be?

None of this is to say that Clutch got it wrong. Their report very succinctly points out that there are levels of ramifications to every PR nightmare. Some are easily corrected with an apology and a coupon. Others will simply fade with time. But when the bad press revolves around physical harm or potential harm (Chipotle, United, Takara) it’s more difficult, if not impossible to come back.

When you’re in the middle of a social media firestorm, it feels like the beginning of the end. But in most cases, if it was an honest mistake or a slip in judgement that got you there, you can regain consumer trust. Take ownership. Fix it. Lay low until the fire is just embers, then go back to business as usual. And more importantly, don’t ever do what you did, again.