Syfy series explores the dark side of social media: The Internet Ruined My Life

Syfy series explores the dark side of social media: The Internet Ruined My Life 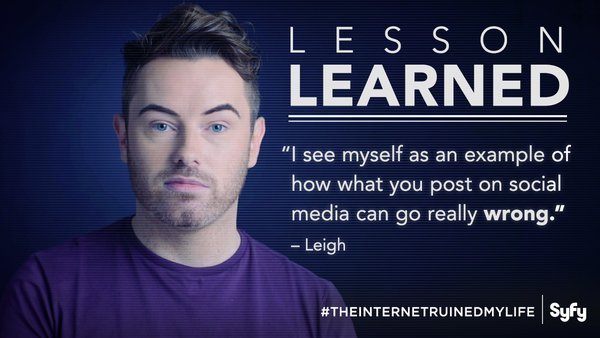 Over the past eight months, I’ve written a half-dozen stories about people whose reputations were ruined because of something they posted online. There was the lion hunter dentist, the outspoken Yelp employee, and the bar patron who claimed her night out was ruined by a woman having a heart attack.

Those people walked right into trouble, but sometimes even an innocuous post can ruin your reputation. It can even ruin your life.

The Internet Ruined My Life is a new series on Syfy. The title sounds like bad, click-bait, but the stories are no joke. These true (ish) tales are a hard lesson in how bad it can get when the Internet turns against you.

Brit Leigh Van Bryan was preparing for his first trip to the US when he Tweeted to a friend, “Free this week, for a quick gossip/prep before I go and destroy America?”

By “destroy”, he meant getting a little wild and crazy in the states. But Homeland Security didn’t see it that way. They nabbed him as soon as he stepped off the plane, and kept him and his friend in custody for nearly a day, before revoking their visas and sending them home. He can joke about it now, but at the time he wondered if he was going to spend the rest of his life in Federal prison.

Suey Park, an Asian-American activist, says she received death threats after she created the hashtag #CancelColbert in response to a racist joke. Suey says she was forced to go into hiding after the internet denizens posted her mobile number and address online and that she was mercilessly stalked for months.

Christopher Hermelin became a victim simply by sitting in the park trying to drum up business with his typewriter. A stranger posted a photo of him on Reddit and hundreds of commenters took the time to leave nasty remarks about his looks, clothes, and perceived personality.

Say what you want about sticks and stones, but anyone who says names can never hurt you has never been the target of an internet mob.

What’s truly chilling about the stories on this new series, is how quickly these incidents go from campfire to wildfire, often overnight. At that point, there’s nothing anyone can do to stop them. You simply have to duck and cover and wait for them to burn out on their own. Christopher says he made a little headway when he addressed the commenters on the Reddit thread.

After I posted, the message board thread’s climate changed immediately. Not unlike real life, people were complimentary and kind. Many people deleted their mean comments—one person was so embarrassed for threatening to smash my typewriter that he apologized to me, and then went through and started trying to make other haters apologize.

Usually, attempts to reason with the masses don’t go over that well.

I can’t swear that everything you’ll see on The Internet Ruined My Life will be 100% true. It is a TV series, so I wouldn’t be surprised to hear that they embellished a few stories to make them more interesting. It’s still pretty, scary stuff.

If you don’t want to end up as a story on season two of the series, pay closer attention to what’s going on around you. Watch your wording on social media, and be particularly careful about commenting on controversial subjects. It’s hard to judge the tone of a Tweet. A sincere post can come off sarcastic and vice versa.

As for embarrassing photos, you’re an adult and you can spend your free time anyway you like. But if you’re a public figure, looking for investors in your company or preparing for an IPO, you’re better off exercising restraint for the duration.

The Internet Ruined My Life airs Wednesday nights at 10, on Syfy.

Share the post "Syfy series explores the dark side of social media: The Internet Ruined My Life"