The “reply all” button strikes again

The “reply all” button strikes again 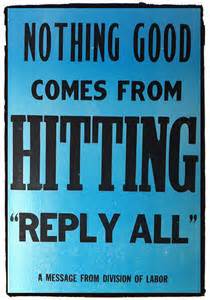 At one o’clock in the morning on the east coast, a blogger woke to the sound of 150 email notifications blowing up her phone.

The poor thing was startled out of bed, thinking some horrible disaster was rocking the world, but what she found was a humorous / annoying / confusing stream of emails from bored / amused / unhappy bloggers who were all being contacted en masse thanks to the invention of the “reply all” button.

Here on the west coast, I also received the same 150+ emails but, lucky for me, I was awake and able to not only process, but enjoy, the carnival of words. It was an interesting hour that both harmed and bolstered the reputation of the “offending” company. How can that be? I’ll tell you.

What happened was this. A company that specializes in placing ads on highly-trafficked blogs created a broadcast email account so they could easily reach everyone on their mailing list. Unfortunately, the list name was set up in a way that allowed anyone on the list to “reply all”.

Enter one unaware blogger who simply wanted to know why the payment she received didn’t match her monthly payout statement. A legitimate question, but instead of sending it to the proper customer service email, she sent it out to the broadcast email of 300+ bloggers.

The first few people responded with confusion. Why did I get this email, they asked (using “reply all”) and that’s when those brilliant wordsmiths caught on. After that, bloggers began replying with greetings and introductions to their own blogs. Some were particularly witty while others tried to slam the lid shut by responding with requests for people to stop responding. Including one from a famous blogger with more than 1 million Twitter followers.

Incredibly, the delighted emails trumped the angry emails 10 to 1 until another round of realization set in. Many of the bloggers on the list, including myself, wondered why this company even had our email addresses in the first place. I’m not a client, but I think I may have checked them out once. Apparently, that was all they needed to grab my email address and add me to their lead list.

As the emails continued, the tide shifted from happy to weary as the novelty wore off. My spam queue was loaded and emails from “real” people began to bounce. Not good. Not good.

At some point, one clever blogger decided to take the party to Twitter. A hashtag was created and more banter ensued. Then. . . oh, the next realization was the biggest. The email that had started it all was brought up again and for the first time, we all actually looked at the numbers quoted in the message. This blogger was making thousands of dollars in ad revenue from the “offending” company.

“Maybe, I wrote that company off too soon,” said one blogger. “If there’s this kind of money to be made. . . ”

And maybe that was the point all along, suggested another. Perhaps the entire mess was actually a bizarre ad campaign to get us all to sign up as partners? Think about it; if they wrote you and said you could make thousands per month, you’d see it as spam. But a misdirected message? What could be a better, more honest, reveal?

It took four hours for the company to discover the problem, plug the leak and issue an apology to the same “reply all” list.

Now that the dust has settled; new relationships have formed and the woman who started the storm has to be looking at the highest traffic numbers she’s ever seen in a 24 hour period.

As for the company at the root – incredibly, it sounds like they’ll be signing contracts with a few new bloggers. This time, “reply all” seems to have worked in their favor. Most of the time, it doesn’t end as well. Every year, we see stories about workers who were fired and confidential information that was leaked due to an errant reply all.

Don’t wake up to an email nightmare. Double check the settings on  your broadcast mailing lists to be sure that “reply all” has been disabled.

And to the company at the heart of this incident; if this was intentional, it was both clever and insidious. Please, don’t do it again.