A marathon is more than just a race. It’s a group of strangers coming together in support of a charity or a city. It’s a bonding event – not just for the runners, but for the thousands of volunteers and cheerleaders that aid and encourage every athlete who is brave enough to face the challenge.

Last weekend, more than 39,000 runners participated in the London Marathon. Most of the public transit systems in the city offered registered runners a free ride to and from the event. Most. . . but not all. The morning of the marathon, South West Trains posted this note on Twitter: 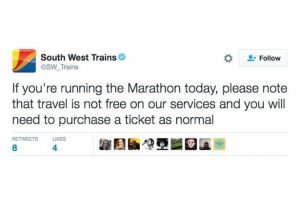 The backlash was almost immediate with Tweeters calling the company stingy and petty. Even more posted sarcastic Tweets thanking the railway for their support.

At the same time, Southern Rail UK posted this:

Then they followed up with a good luck message for the runners. By that time South West was scrambling to remove the offending Tweet. They never mentioned the marathon again, choosing to concentrate on the usual travel warnings for anyone who wasn’t at the event.

South West could have spared themselves a lot of grief if they had followed the old Thumper adage of “If you can’t say something nice, don’t say anything at all.” It’s unlikely that passengers changed their travel plans when they saw that they had to pay. If that’s the train you need to take, it’s the train you have to take. Finding out ahead of time that they’re not giving away free passes doesn’t change your options.

At the very least, they could have softened the blow with a friendly, more apologetic message. “If you’re running in the marathon today, we wish you good luck but unfortunately we can’t offer free tickets at this time.”

Of course, the moment South West decided to buck the trend and charge, they were in trouble. The marathon is point of pride for the city. When you say runners have to pay, it’s not just business, it’s as if you’re turning your back on the community.

Since the marathon started in 1981, it’s raised over £770 million for charity. That money came from businesses and individuals who saw the marathon as an opportunity for greater good.

I don’t know how much South West would have lost if they had given away free tickets, but what they need to do now is donate an equal amount of money to one of the marathon charities. Take it out of the advertising budget for the year. I promise, that donation will do more for the brand than any billboard or TV commercial.

Money is tight all over. But sometimes you have to put community ahead of profits. This was one of those times.

In an almost ironic twist, Southern Rail, who did such a good job on social media during the marathon, just announced that train service will be disrupted due to a strike. Good thing they got all that good will over the weekend. They’re going to need it.