Flying the not so friendly skies: How United’s CEO made a bad situation worse

Flying the not so friendly skies: How United’s CEO made a bad situation worse 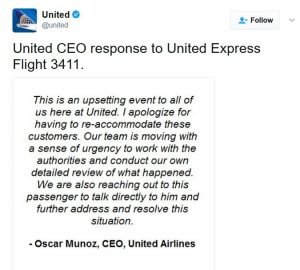 It’s hard to image how things could have gotten so out of hand on that now infamous United Airlines flight; but once it happened it was time for the CEO to face the angry mob and that’s where things went from bad to worse.

Let’s back up to the beginning and see how this whole thing came about.

United Airlines needed to get a few crew members from here to there in order to get another flight into the air. To do this, they had to bump several paying customers off of a flight. No big deal, this is done all the time. Usually, they offer a financial incentive and people offer to give up their seats. In this case, (I don’t know why) they chose the people who had to leave. David Dao was one of them and he didn’t want to go. The situation escalated to the point where the airport security officers were invited to board the plane and they forcibly dragged Mr. Dao off the flight. Yes, dragged. He bumped his head on an armrest which led to blood and bruises and a lot of crazy commotion while the rest of the passengers filmed it all for later posting on social media.

Understandably, United was then faced with the ugly truth which they could not dispute. The video went viral. Parody hashtags were created. Late night hosts turned the incident into monologue fodder and even competing airlines used the moment to toot their own horns. In other words, that single moment in time turned into this week’s (possibly this month’s) biggest PR nightmare.

As students of the #PRFail, we turned our attention to United’s CEO Oscar Munoz, who just last month was named PRWeek’s “Communicator of the Year for 2017”. If anyone could extradite his company from the quagmire, surely he could!

Mr. Munoz stood up in front of the press and world and said, “This is an upsetting event to all of us here at United. I apologize for having to re-accommodate these customers.” Then he said there would be an investigation and that the company would be reaching out to Mr. Dao to “further address and resolve this situation.”

Can you guess which word in that speech was the one that hurt?

This is where I. . . the voice of reason. . .jumps in for just a second. I’m not looking to blame the victim, but was a seat on a plane really worth a physical battle? This wasn’t a civil rights protest. This wasn’t a matter of life and death. And would it surprise you to learn that the passenger in question is a medical doctor? From out here, the entire scenario is surreal, to say the least.

But let’s back to United Airlines and their idea of crisis communication. Legal departments being what they are, I’m sure they advised Mr. Munoz not to make any comment that could make United culpable in court. Probably a wise move in the long run, but it left him high and dry in the court of public opinion. United needed to express their remorse for Dr. Dao’s suffering, not to mention the distress the situation caused for everyone on board the plane.

Remember, during a crisis, it’s not about whether or not you’re right. It’s about whether or not the public believes you’re sorry. What if, a day from now, we find out that the passenger threatened crew members and was deemed an actual danger to the people on board. (Not saying that happened, just saying what if). Would that story go viral just as fast? Would it put out the fires that are still raging all over social media? Would United’s stock go back up along with ticket sales? Call me cynical, but I say not. Once we’re in crisis mode, no amount of reason and truth is going to get us back to square one. The only thing that helps a company reclaim their rep is a sincere apology, a believable promise to bring those who participated to justice, and a plan to prevent it from happening again.

United almost got it right the third time with their follow up, follow up apology. In that statement, Munoz called the incident “truly horrific” and added “I want you to know that we take full responsibility and we will work to make it right.” Now why didn’t he say that in first place?

This case, like many others, has the company taking the fall for an angry or overly aggressive agent. In this case, the security guard, who wasn’t even a United employee. But before you let them off the hook, someone needs to ask why the flight crew stood aside and let this happen. Seems like there’s plenty of culpability to go around.

Now that the world is walking around with video cameras in their pockets, incidents like these are going to keep popping up on social media. In some ways, it’s good to know that companies can no longer hide their big mistakes. On the other hand, what we see in a 30 second clip is never the whole story.

The takeaway today is this: if you ever find yourself on the receiving end of a social media take-down, remember that the time for telling your side of the story is after the people with the pitchforks have gone home. Until then, stay apologetic. Stay sincere and avoid placing blame on anyone else, even if someone else is responsible. That’s how you get through the first 24 hours of a PR nightmare.

Andy’s Thoughts: Tune in to this week’s podcast to hear my thoughts on how United can prevent this from ever happening again.

Share the post "Flying the not so friendly skies: How United’s CEO made a bad situation worse"