Thinking of recording video of an angry customer? Read this first!

Thinking of recording video of an angry customer? Read this first! 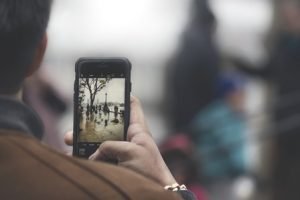 Most people know that it’s illegal to record a phone conversation without first alerting the person on the other end of the phone. Not doing so is known as wiretapping and it can get you into serious trouble.

That being so, video taping someone without their permission must be illegal, too? Right?

Apparently not. Or maybe not. Or yes, depending on where you live and the exact circumstances and the name of the judge that hears your case.

Surreptitiously shot mobile phone videos are always popping up on social media, websites, even the nightly news. It’s as if every human being on the planet has been issued a junior reporter badge along with their phone plan. And though it’s nice when these civilian reporters capture random acts of goodness and light, more often what they’re capturing and sharing is a black mark on a person or company’s reputation.

United Airlines recently made the news – yet again – when a passenger decided to record the conversation he was having with a rude airline employee. The employee asked him to stop and when he refused, she canceled his airline reservation, then started filming him when he got angry. Tit for tat; because that’s always a good idea.

Airport security got involved and according to that man, the customer had every right to film because the airport is a public space. The counter agent didn’t agree and refused to give the flyer his ticket. The incident went to the court of public opinion (the web) and the airline took another hit to the old reputation. (Not sure how many more of these United can handle before they go down for the count.)

This little story brings up two important issues. First, is the right to film another person without their permission. It’s easy to understand why the man wanted to film the interaction. He was arming himself with the proof he’d later need to get satisfaction from the airlines. Whether he was also thinking – I’ll post this online and get my revenge – I can’t say, but even if his intentions were malicious, it was the employee’s responsibility to control the situation. Telling him to stop filming only made her look more in the wrong and that’s the worst move she could have made in the situation.

The law states that people cannot expect privacy in a public place. So if they’re caught on film while walking through an airport, that’s okay. But specifically recording a conversation is different. According to Videomaker magazine, most states allow the recording of images, but when you record two people having a conversation, that’s eavesdropping which is illegal in a lot of places.

Which brings me to important issue number two: whether or not the man had a legal right to film the customer service rep is irrelevant because United would have to be out of its mind to sue an unhappy customer for something so petty. What is relevant is the employee’s behavior and attempt to film the interaction with the customer. It’s possible that she did it for her own protection, but it sounds like it was more of a childish comeback. (I’m rubber, you’re glue. . . . etc.) Even if the customer was wrong, it was her job to make it right. Canceling his ticket? No. Recording him. No. Airport security? Big no. What she needed to do was keep her cool and call a supervisor who had the power to solve the problem on the spot. In trying to uphold the company’s policy, the employee gave the world another reason not to fly United.

We can’t lay all the blame on the employee. We’re all only human. People are going to lose their cool in a frustrating situation, unless you’ve given them the tools they need to handle bad situations before they get out of control.

One of the tools you must hand them is a primer on video recording. What are the laws regarding both images and conversations in your state? What should an employee do if they’re being recorded? Is there ever a case where it would be okay if your employee felt the need to start a recording? What about recordings between employees during a one-on-one situation like an employee review or a large group meeting?

Ten years ago, we didn’t need to have a video recording policy, but in 2017, it’s a must. Figure it out. Write it down. Run it by a lawyer, then make sure everyone in your company reads and signs off.

There’s nothing you can do to stop a stranger from filming an unpleasant interaction with one of your employees, but you don’t want to end up in court because your employee was the first to pull out his phone.