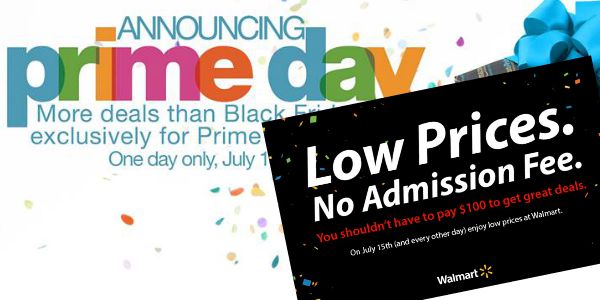 Today is Amazon Prime Day. According to the hype, it’s going to be the biggest shopping day, since the creation of Black Friday but there’s a catch. In order to take advantage of the thousands of incredible low price deals, you have to be a member of Amazon Prime.

Yes, you have to pay for the privileged of getting a great deal at Amazon and no one wants you to know this more than Walmart. Two days ago, Walmart’s CEO published a pointed blog post that slams Amazon (not by name of course) for their pseudo sale day.

If you’ve shopped Walmart.com, you’ll know that every day is a special day where everyone has access to the same low prices we offer. We mean everyone: you, your neighbor, your boss, your best friend … all of whom are looking for the best price on the things they want and need. We’ve heard some retailers are charging $100 to get access to a sale. But the idea of asking customers to pay extra in order to save money just doesn’t add up for us.

The post goes on to say that Walmart’s low prices won’t be just a one-day thing and they’re cutting down the minimum order requirement for free shipping from $50 to $35. Very generous.

Walmart isn’t wrong but is their handling of the situation right? It’s bad enough that they’re slamming the competition but their timing allowed them to ride smoothly on Amazon’s coattails while doing it. Hundreds of articles that would have covered only Amazon Prime Day, now include mentions of Walmart’s big sale, too.

So maybe Walmart’s “standing up for the average consumer” act was never anything more than a way to horn in on Amazon’s party? If so, that’s pretty low.

Any time you choose to market your business by putting down the competition, you risk alienating customers who like both brands. In this case, Walmart might have the “everyman” on their side, but they won’t have the more than 10 million Amazon Prime Members who enjoy being treated like they’re something special.