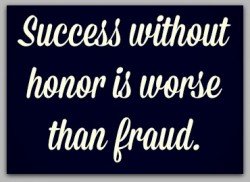 Something has gone terribly wrong and now you need a co-worker to help cover your tracks. You’re going to have to lie to that person, who in turn will have to spread that lie (unwittingly or otherwise) around the office.

You have two choices of co-conspirator; Frank who has a framed photo of his family on his desk or George who has framed quotes about honesty on his desk.

Who are you going to pull in to your web of lies?

If you’re anything like the participants of a recent UNC’s Kenan-Flagler Business School study, you’re going to go with the family man and avoid George with his moral stand.

Researcher Sreedhari Desai found that subjects tasked with spreading lies were much less likely to involve people who had the quote “Success without honor is worse than fraud” in their email signature. She also found that participants who were exposed to the quote (as opposed to those who saw neutral quotes or blank email signatures) were less likely to even continue spreading lies.

In another, more real-world test, the Professor found that religious symbols had the same effect. In India, office workers who displayed images of Hindu gods or quotes from the Koran or the Bible were generally sparred from unethical requests.

When someone is in a position to request an unethical thing, they may not consciously be thinking, “I won’t ask that person.” Instead, they may perceive a person as morally “pure” and feel that asking them to get “dirty” makes an ethical transgression even worse. Or they may be concerned that someone with moral character will just refuse the request.

What’s fascinating about this study is how little it took to sway a person away from doing something unethical in the first place. Not only did quotes and religious imagery work, but even “morally-branded” T-shirts had participants rethinking the error of their ways.

Let’s take this idea to the next level. Suppose your company just made a huge mistake and your CEO is going to offer a public apology.  Would we be more likely to believe and accept his apology if there was a quote about truth and honesty on the wall behind him? What if it was just an image of Abe Lincoln?

What if your maintenance manager was thinking of falsifying his records to cover up for the days he slipped out early. Would he still do it if he found an honesty quote in his email inbox at the start of every day?

If Desai’s findings are true in the real world, just think of all the reputations that could have been saved for want of a virtuous meme.