Wendy’s has a beef with McDonald’s Black Friday tweet

Wendy’s has a beef with McDonald’s Black Friday tweet

It’s 5 o’clock on the day before a huge holiday weekend. You have just enough time to get home and pack before catching the red-eye. Then it’s 4 long days of family, food and hopefully fun. All great, except for that one little thing chewing on the back of your brain. The feeling that you forgot to do something important before sliding into holiday vacation mode. What could it be. . . . . ?

Oh yeah. That was it.

Someone on the McDonalds social media team had a very bad Black Friday. Hopefully, they didn’t start the holiday season with a pink slip because, come on, it’s an easy mistake. And it’s not like they accidentally moved the decimal point on the big screen TV prices. And it’s not like anyone was paying attention to the McDonalds Twitter account on the biggest shopping day of the year. . . . 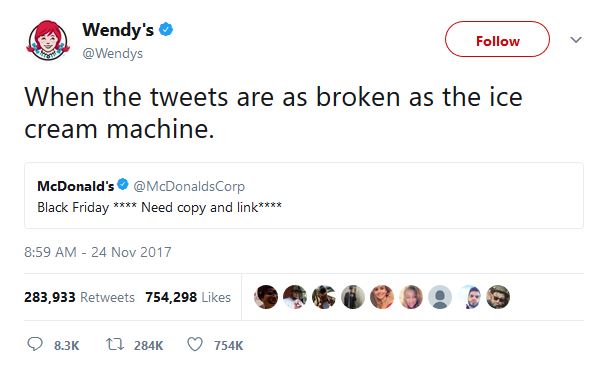 This isn’t the first time the square burger joint used their Twitter account as a pointy stick with which to jab competitors. Earlier this year, Wendy’s piled on when McDonalds Tweeted that they were going to start using “fresh beef” in the Quarter Pounders in the “majority” of their restaurants. Wendy’s – along with the rest of us – wondered what that meant for the rest of the menu in ALL of their restaurants.

These cleverly crafted quips (with even more clever follow-ups) make it seem like Wendy’s is winning the war of words, but are they? Is pointing out the mistakes of the competition, even in a humorous way, a good idea?

Making fun of the enemy when he’s down could backfire. It could make the responding company look like a bully, especially when it’s such a strong response to a harmless, and understandable mistake. Forgetting to fill in the holiday Tweet was embarrassing, and the person responsible likely took some heat. But it’s harder for the management to forgive and forget when the competitor turns that simple mistake into a viral news story.

So what effect did this exchange have on the two fast food chains?

Still, both companies got quite a bit of press which included links to both Twitter accounts. Sure, McDonalds comes off looking like a clown, but how many people were saying their name and viewing their feed that wouldn’t have done so otherwise? How many people ate lunch at McDonalds last weekend because they had the brand on the brain?

As for the bully factor, Wendy’s is making it through relatively unscathed. A handful of Tweeters used the snarky thread to fire back with allegations of food poisoning, slow service, and hair in the beef. To the one Twitterer who dared to say, “I’m getting McDonald’s today”, Wendy’s replied “Sorry about the bad day. Better luck tomorrow.”

Wendy’s is lucky that reply slid in under the grill. It’s one thing to poke fun at the competition but insulting individuals (even trolls) is never a good idea.

In the end, McDonalds took the high road and blamed the mistake on a lack of coffee – or more accurately – a McCafe. 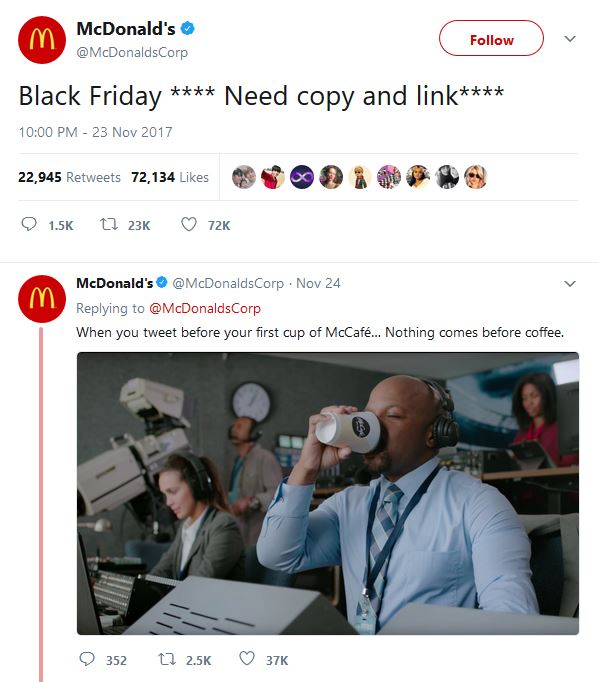 Time for the big question: is it okay to Tweet sarcastic jokes when your competitor makes a mistake? That depends largely on your audience and the severity of the situation. If your company has a young, trend-loving audience (Wendy’s, Taco Bell, Old Spice, DiGiorno Pizza) you can get away as long as the infraction isn’t serious.  A badly written Tweet is fine, but if the mistakes involves people getting hurt, leave it alone.

If your audience is more traditional or you’re in a more serious industry, don’t even think about emulating Wendy’s. Jabs from one fast food slinger to another is funny but no one wants to see bankers, doctors or lawyers making jokes out of a competitor’s mistake.