The White Moose Cafe vs the Vlogger – who won?

The White Moose Cafe vs the Vlogger – who won? 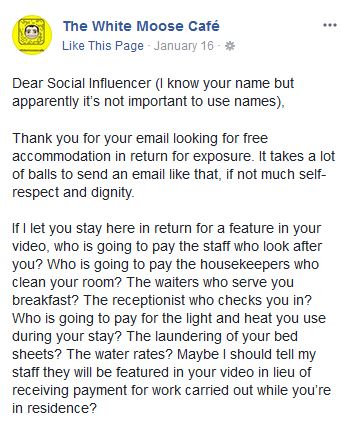 Earlier this week, a YouTube Vlogger (as in video blogger) and the owner of a hotel in Ireland got into a public row that polarized both the blogging community and business owners around the world.

Okay, that’s a bit overly dramatic but so is this whole fight over freebies, entitlement and public shaming.

It began when a YouTuber with a pretty decent following, wrote to a hotel in Ireland asking for a free room over Valentine’s Day weekend in return for a review on her channel.

As a writer whose been on both sides of the ask, I don’t think her request was out of line. It was polite. She explains the size of her following and notes that she’s done this before with great success. No harm in asking, right?

Except in this case, she asked a man who regularly writes angry blog posts about life, other companies and websites that review hotels (such language!). In the bloggers defense, she probably didn’t visit the owners blog before writing him. She probably sent out dozens of these emails to every hotel in her vacation zone. She was just unlucky enough to hit one with a hair trigger.

After receiving the vloggers request, the owner of the Charleville Hotel Lodge (posting under the name of his other venture The White Moose Café), took the girl to task with a scathing Facebook post. In short, he said no. He then followed up with a ban on all bloggers:

“Perhaps if you went out and got real jobs you’d be able to pay for goods and services like everybody else. Just a thought!”

The story went viral and rather than stepping back, the owner then sent the blogger a bill for $6.5 million dollars which he claims is the value of all the publicity she’s received thanks to him.

Her YouTube numbers have climbed significantly, and I’ll bet there are hotels begging her to come and stay with them for the holiday, so he might be right about the value of the ban.

And since the hotel owner is a true entrepreneur, he’s now created a line of t-shirts that say “I demanded a freebie at the White Moose Café and all I got was this lousy T-shirt”.  Pretty clever that he’s using an incident involving a hotel to gain publicity for his café, don’t you think?

The hotel/café owner has received his fair share of hate posts from bloggers and lovers of common decency but he seems more than happy to take it on the chin, while the vlogger is ready to put this whole incident to bed – king size with high-quality sheets and a chocolate on the pillow.

Do we even need to point out the reputation repercussions for engaging in this type of public fight? We hope not, but here’s some advice from Andy to get you on the right track:

“Focus on building a brand that’s so great that the blogger wants to come and review your hotel because they’ve heard so many great things about it that they would get a benefit by showing their audience your hotel. Because everybody is talking about it, and everybody wants to see it. There’s two sides to this. Bloggers should focus on building the strong reputation so hotels reach out to them. Businesses should focus on just being polite, say “No, thank you,” if they don’t feel the exposure is worth their time.”

And for all you bloggers and vloggers out there, Erin says:

“I also think that this is a good opportunity to remind people to do their homework. This all could have been avoided if this blogger had taken a moment and researched the property owner, and tailored her approach to him instead of expecting him to bend to her.”

Ironically and possibly intentionally, the feud seems to have done more good than harm for both parties. It does make you wonder if some of this public fight wasn’t engineered to be the popcorn drama that the internet thrives on. What do you think?